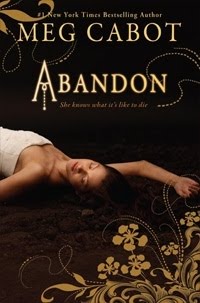 Abandon by Meg Cabot.
Reviewed by: Baby Sister Brittany
Release Date: April 26th, 2011 (Get your Pre-Order on, kids)
EDIT: Abandon is an April pick and 45% off on Barnesandnoble.com
The Sisters say: Spooky, Swoon-worthy, and Scintillating
(Summary from goodreads.com)
New from #1 New York Times bestselling author Meg Cabot, a dark, fantastical story about this world . . . and the underworld.
Though she tries returning to the life she knew before the accident, Pierce can't help but feel at once a part of this world, and apart from it. Yet she's never alone . . . because someone is always watching her. Escape from the realm of the dead is impossible when someone there wants you back.
But now she's moved to a new town. Maybe at her new school, she can start fresh. Maybe she can stop feeling so afraid.
Only she can't. Because even here, he finds her. That's how desperately he wants her back. She knows he's no guardian angel, and his dark world isn't exactly heaven, yet she can't stay away . . . especially since he always appears when she least expects it, but exactly when she needs him most.
But if she lets herself fall any further, she may just find herself back in the one place she most fears: the Underworld.
Abandon all hope ye who enter here?
Try abandon those attempts at sleep and read this book in one sitting!
It’s hard to remember the first Young Adult book I read that captured me all those years ago, but I do remember the first YA paranormal romance I ever read, and that was The Mediator series by Meg Cabot. If you have a thing for ghosts, especially swoon-worthy Spanish ones, you should check it out. I feel a little bit as if Meg Cabot has come full circle with her latest book. The Mediator featured ghosts stuck in the world of the living, while Abandon features a young girl, who faces the prospect of being stuck in the Underworld.
Pierce’s story is told in pieces throughout the book with the past and present interwoven, but this much you glean early on—Pierce died, and in the Underworld she attracted the attention of John—the keeper of the Underworld. He’s not quite Hades, but rather has inherited this job. Pierce was determined to get back to her old life, and she succeeded, but John had to pay the price.
Things I loved about the book:
1. Once again… Greek Mythology. In case you can’t tell—we love the Greeks here at YA Sisterhood! When I heard that this book was a re-telling of the Persephone myth, I was a bit reluctant to dive right into it honestly. I’d just read the Goddess Test (See our previous review) and I wasn’t sure that I wanted to read two books with the same plot within a two-week period. But they couldn’t be more different! I would say Abandon is only loosely inspired by the Persephone myth. This story is entirely it’s own.
2. John. I liked scary, keeper of the underworld John. I liked sweet “I talk to children” John.  I liked strong, dangerous “I ride a giant horse, don’t mess with me” John.  And I LOVED “I suffer endlessly because of you, but I don’t care” John. I just loved John. John. John. John. (I’m hoping he’ll be like Beetlejuice and suddenly appear when I say his name three times). John really made this book for me. Pierce was an interesting narrator, and I enjoyed her story, but John had all my attention. He is at once profoundly human and utterly inhuman. He gets the worst of both worlds. He experiences all the pain and suffering of the human world (more so, in fact), but has the detached, hardened emotions of someone who controls where you go in the afterlife.  And he has the immortality of the gods, which only gives him longer to stew in his loneliness. I can’t wait for the next book to learn more about him—how he became the keeper of the Underworld and what he had to go through after Pierce left.
3. The setting in the Florida Keys. When I think Florida Keys—I think sunshine and summer and bikinis and fun. This book had all of that, but it also had a layer of darkness and danger. The setting was lush and decadent and fascinating.  I never for a moment thought—why would the Florida Keys have anything to do with the Underworld? It all just clicks into place perfectly!
4. The twists! Oh, the twists!!! I can’t tell you much more except that it’s pretty… twisted. :)


5. The Supporting Characters! Man does this book have a cast of characters! I loved Pierce's uncle and her cousin. But my absolute favorite-- the old man in charge of the cemetery. SO AWESOME.
I’ve seen some people complain that the book takes too long to get going. And it’s true, that you don’t really get the full story of what exactly happened to Pierce until fairly late in the book, but I actually liked the mystery. It was like a puzzle—Cabot gives you these little patchwork pieces, and the intensity only builds as the pieces start to fall into place.
I, for one, am ecstatic with Meg Cabot’s return to the Paranormal world. Count me in for the adventure!  Add this to your to-read pile (and while you’re at it, throw The Mediator series on there too).
Posted by Brittany Howard at 6:39 PM