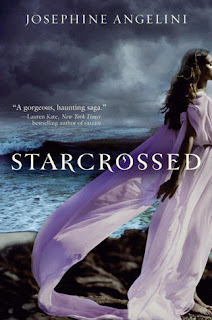 How do you defy destiny?
Helen Hamilton has spent her entire sixteen years trying to hide how different she is—no easy task on an island as small and sheltered as Nantucket. And it's getting harder. Nightmares of a desperate desert journey have Helen waking parched, only to find her sheets damaged by dirt and dust. At school she's haunted by hallucinations of three women weeping tears of blood . . . and when Helen first crosses paths with Lucas Delos, she has no way of knowing they're destined to play the leading roles in a tragedy the Fates insist on repeating throughout history.
As Helen unlocks the secrets of her ancestry, she realizes that some myths are more than just legend. But even demigod powers might not be enough to defy the forces that are both drawing her and Lucas together—and trying to tear them apart.
Starcrossed by Josephine Angelini
Release Date: May 31st 2011
Reviewed by: Baby sister Brittany
The Sisters say: Solid. Satisfactory. Smashing.


What I LOVED about it:
THE SETTING. Nantucket made for a unique and interesting setting that worked well with the plot of the book.
THE MYTHOLOGY. I’m a huge Greek mythology fan, and all the connections to the Trojan War made me one happy reader! I especially enjoyed Helen’s mysterious dream adventures, and her encounters with the fates.
HELEN’S BFF, CLAIRE. She’s pretty awesome. That’s all I’ve got to say.
THE RELATIONSHIPS. I adored Helen’s relationship with her father. They were quirky and witty, and it was fun to look in on their lives. I loved the family dynamics of the Delos family (which, by the way, abounds with dreamy male characters).


***SPOILER***
I also loved the way Helen’s mother threw a wrench in the plot. Her actions provided a number of twists and turns, that kept me turning the page.
***END SPOILER***
What I didn't love about it:

I loved most of the book, so there's not much to say here. I did have two small issues with the book, though.

***MINOR SPOILERS***
HELEN’S INITIAL HATRED FOR LUCAS: While her blinding hatred for Lucas upon first sight was certainly interesting, and I liked that aspect of the plot, I wish she would have acknowledged a little more just how freaking WEIRD it was that she loathed this guy so much. She lamented about how embarrassing it was, but she only briefly talked about the strangeness of her instant and unprovoked wrath by chalking it up to just another weird thing about her. All in all, though, this only bothered me momentarily before I was swept up in the story again.
THE ENDING: I feel like the book ended just before this HUGE THING that is supposed to happen. I understand the desire to leave your readers wanting more so they’ll come back for the sequel, but when I turned that last page, I certainly wasn’t expecting it to actually BE the last page. For once, I think I would have rather had a cliff-hanger ending than the pre-mature wrap-up that I got at the end of this book. Though my misgivings about the ending could have more to do with the fact that I didn't want it to END!
Overall, the positives far outweigh the negatives! I, for one, can't wait for the next book in the series.
Add this to your to-read pile!
Posted by Brittany Howard at 9:18 PM

Email ThisBlogThis!Share to TwitterShare to FacebookShare to Pinterest
Labels: Review, Starcrossed, YA
Newer Posts Home
Subscribe to: Posts (Atom)
Three sisters (and some honorary ones) share a love of YA literature, review new books, and talk old favorites.