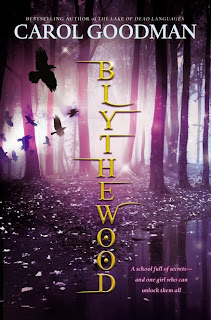 At seventeen, Ava Hall is already orphaned and working at the Triangle Shirtwaist Factory when her life is turned upside down by the horrific fire that kills her best friend and leaves her questioning her sanity.  After a summer locked away in a mental institution, Ava is sent to Blythewood, the boarding school where Ava's mother spent the happiest years of her life.  But Blythewood is no ordinary finishing school for young ladies:  it's a training ground for magical warriors who form the mortal world's only line of defense against the evil world of Faerie.

As Ava develops her own powers, she seeks to solve the many mysteries in her life:  Who was the handsome young man who helped save her from the fire-- and why does she remember him having wings?  Why did her mother commit suicide?  Who is the sinister stranger who's been following her from the city, and what's his connection with the deaths and disappearances that are plaguing Blythewood?  When evil broadens its scope beyond the Blythewood campus to impact world events, Ava must decide whom to align herself with, and figure out how to stop the dark forces, even if that means going against everything she’s been taught.

Set in New York's Hudson Valley in the early 1900s, the gothic Blythewood Trilogy vividly portrays a world-- both real and imagined--on the brink of change, and one girl's quest for the truth about her world, her school, and herself.
******************************************************
Carol on Blythewood:
One of my favorite things about writing BLYTHEWOOD was writing an all-girls school.  I went to Vassar which is one of the Seven Sisters, which are the Colleges that were the female counterparts to a lot of the elite colleges from the days when schools like Harvard or Yale would not allow women.  So, the idea of an all-female institution has been floating around my head for a while.  There are a few all-girls high schools and colleges still around (Smith and Mount Holyoke both only accept women and Miss Porter’s is probably the most famous all-girls high school still around) but I feel like they in many ways are emblematic of an era that ended in the early 20th century.  What’s so special about Blythewood being a girls school is that women are in charge of everything and can’t be sidelined like they very much were in the world at that time.  Blythewood is a school run by women for training girls into guardians of the magical world.   Having Blythewood by a girls school also allows me to develop the girls’ dynamics with each other better.  My three main girls, Ava, Helen, and Daisy, all have romantic entanglements but those relationships are not the same as the friendship they have with each other, and those friendships are really the focus of BLYTHEWOOD.
About Carol Goodman:
Bestselling author Carol Goodman’s books have been nominated for the IMPAC award twice, the Simon & Schuster/Mary Higgins Clark award, and the Nero Wolfe Award. Her second novel, The Seduction of Water, won the Hammett Prize in 2003. Visit her at carolgoodman.com.
Posted by Jennifer @ YA Sisterhood at 12:01 AM