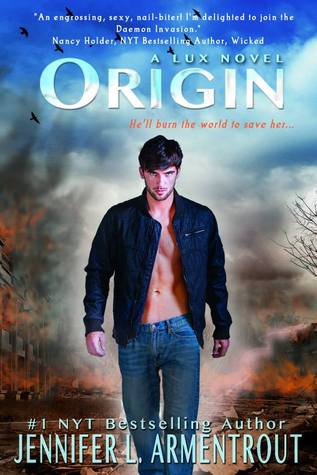 Daemon will do anything to get Katy back.

After the successful but disastrous raid on Mount Weather, he’s facing the impossible. Katy is gone. Taken. Everything becomes about finding her. Taking out anyone who stands in his way? Done. Burning down the whole world to save her? Gladly. Exposing his alien race to the world? With pleasure.

All Katy can do is survive.


Surrounded by enemies, the only way she can come out of this is to adapt. After all, there are sides of Daedalus that don’t seem entirely crazy, but the group’s goals are frightening and the truths they speak even more disturbing. Who are the real bad guys? Daedalus? Mankind? Or the Luxen?

Together, they can face anything.

But the most dangerous foe has been there all along, and when the truths are exposed and the lies come crumbling down, which side will Daemon and Katy be standing on?

And will they even be together?


I'm back!!!  I know it's been awhile since I've posted a review here, but I do have a good reason.  We have a new little one to add to our sisterhood ranks.  His name is August, and he is such a little joy.  For some crazy reason, I had absolutely no desire to read when I was pregnant.  Then the week after I had him, I was dying to have a book in my hands!  I have been putting away the books like crazy these past 3 months. Crazy how hormones are sometimes!  It's good to be back in the reading world, and what a good world that it is at the moment!  I have read SO MANY good books lately and am dying to talk about all of them.  Plus, I have 9 months worth of catching up to do!  Enough about myself, lets move on to Daemon, a much yummier topic!

I know you know what I am going to say, but I have to say it!  Origin is the best in the series yet!  Origin has freakin' everything and then more.  I'm not quite sure where I was expecting this story to go, but it definitely did not stay on the straight and narrow.  JLA does not pull her punches in this one.  She lets it all fly and didn't hold anything back.  You may think you know what is going to happen, but trust me, you don't!

Origin picks up right where Opal ripped out hearts out.  It opens in Kat's POV but switches back and forth between her and Daemon.  So all of you ladies that have been dying to catch a glimpse into Daemon's mind, you get plenty of it.  I loved every second of his POV.  He's exactly how I imagined him, but possibly a little more cocky...if that is even possible!  There's so many great and poignant moments amidst all all the incredible action and we're able to see them through Daemon's eyes.  It's what we've all been waiting for!  We also get all the gushiness!  Gone are the days of the reserved with love words Daemon.  He knows what he wants now and he's not shy about it either!  Honestly, you might all be surprised about just what all Daemon wants and how far he is willing to go to get it!  But, that's the reason why we love him.  He will move heaven and hell along with all the planets to get to what he loves!  I also think the heat in our house picked up a degree every time I read, "I love you."

The action, sweet baby origins (you'll get this joke if you've read the book), the action--it's phenomenal!  I felt like OPAL was the calm before the storm.  And, the storm in ORIGIN causes all hell to break loose, like the dark, crazy, really hot kind of hell!  I felt like I was watching some Alien action movie.  I was waiting for Will Smith to pop out and say, "Welcome to Earth!" after he punches some evil alien!  JLA has a way with description that makes the pages jump to life right in front of your eyes.  I could see it all so clearly as if the action was taking place right in front of my eyes instead of just in my imagination.

Get ready to meet some great new characters.  Some will quickly become some of your favs and others will make your blood boil.  But all in all, JLA is a master at characterization.  Even those you hate with the greatest of passions, you have to admit, they are pretty great characters!  I'm even hoping with all hope that there will be a spin-off novel or 2 for some of these characters!

There are plenty of surprises too!  Some things I saw coming, but other's I was left with my jaw on the floor!  There was one thing in particular that I did not see coming at all, but it left me in a fit of girlish giggles!  On the other hand, Jen doesn't hold anything back.  There's a war going on in Origin and the results are realistic.  This isn't one of those books where it's WWIII but somehow all the characters survive!  Don't get to close to anyone because they might not make it out.  I like that though.  I like that we see the truthful, painful side of war even though it left my heart heart hurting in the end.  All choices have consequences, and I loved seeing how far the characters are willing to go for the choices they have made.

This was my favorite novel of the series to date.  I am dying for the finale of this story, but then again I really don't want it to be over!  So, all I can say as usual with all JLA books, is read it!  You will love it and come away with more book boyfriends!

Posted by AmyG@YA-Sisterhood at 12:00 AM