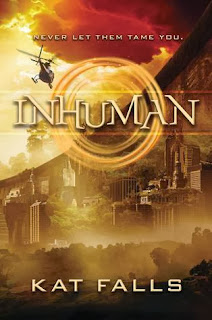 
I have been in a YA reading slump for the last two months, and I was almost ready to throw in the towel.  I thought maybe it was me just not being in the mindset for YA, but then I picked up Inhuman by Kat Falls.  I hadn’t heard much about it, and the reviews were sketchy; but the synopsis sounded promising.  So, I sat down and started reading….4 hours later and I had finished the book.  I COULD NOT put it down!!!  So, thank you Kat Falls for writing such an amazing YA dystopian AND for bringing me out of my slump!


I was hooked from the first page!  I just loved this world that Kat created—a seemingly perfect world on one side of the wall.  But on the other?  Savages, mutants, mystery, and two devastatingly gorgeous guys that will knock you off your feet.  Kat did such an amazing job setting up this sense of mystery about the other side of the wall, the Feral Zone.  After the gruesome rumors that Lane (our main character) hears, you just can’t help but want her to find her way over the wall and explore the dangerous labyrinth that was once the United States.


Kat wastes no time bringing our heroine over the wall, and from there, the action abounds.  Every chapter was fast paced, and I never got bored.  I loved to see Kat adjust to live in the Feral Zone, and her compassion and determination really drove the story.


OH, and the boys.  I love them both—which is something I don’t say very often.  Now, I still have a favorite (I’m Team Rafe all the way), but I really enjoyed getting to know each of the guys vying for Lane’s heart.  First, there’s Everson, the soldier she meets just across the wall.  He’s walled off (no pun intended, but hey), and he seems sincere when it comes to his desire to make the world a better place.  While I figured out very quickly who he really was, I still found myself loving his friendliness and attention to Lane.  Then, there’s Rafe, the roguish tough guy who hunts the ferals that put those outside the wall in danger.  He’s my favorite because I love the broken, dangerous ones; not to mention that his cockiness and smirk put him smack in the alpha male zone.  (LOVE!)  We get to see the façade that both of them put on, but there comes a time when we get to see those facades break down; and when they do, gosh, you will just love them more.


The story has an Island of Dr. Moreau feel to it with a mutating virus creating human and animal hybrids.  I loved how imaginative Kat was with her “manimal” creations, and I can’t wait to see what happens in the next book after that explosive ending.


Overall, this was a brilliant read, and I am dying to find out what happens next!  I highly recommend this to those of you who love new and disturbing worlds coupled with a love triangle that will take your breath away.
Posted by Jennifer @ YA Sisterhood at 12:01 AM