Today we have the pleasure of hosting rhe Snakeroot Blog Tour!!  Andrea has been amazing and written a guest post. 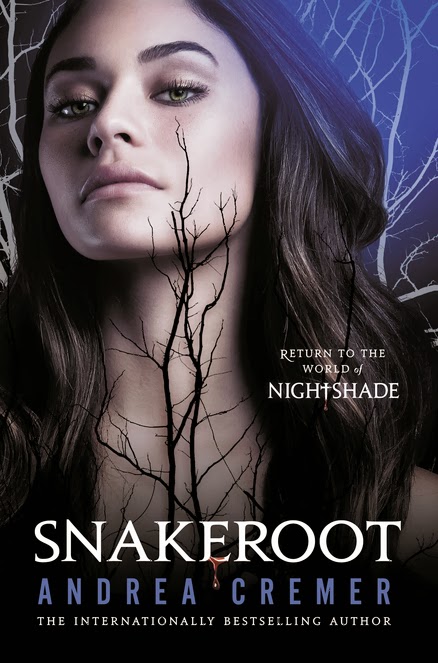 Snakeroot sets up a new conflict and the two characters pitted against each other should be very familiar to Nightshade fans: Ariadne (Adne) the Weaver and Logan Bane. Adne and Logan struck me as natural opponents who were destined to clash in a way that would have cataclysmic ramifications for everyone around them.

While Adne and Logan are very different people, they have more in common than one might expect. At the opening ofSnakeroot, Adne is the sole living member of her family. The Witches War took her father, mother and the brother she’d barely begun to know. Though she finds comfort in her relationship with Connor, the toll of so many losses has left Adne vulnerable. In the final battle of the war, Adne discovered she possessed powers unlike those of any other Searcher – powers that Bosque Mar recognized. Adne’s dreams are full of strange, disturbing visions that make her question her place among her peers and her own sanity. Her doubts, fears, and desire for knowledge could pull her away from the ones she loves and into the arms of her oldest enemy.

Like Adne, Logan’s family has been destroyed by the war, turning his world upside and sapping the powers he’d always taken for granted. Though Logan colluded with the Searchers in the final battle, thinking it was the only way to save his own skin, he’s decided that losing his status as a Keeper might be more than he can bear. Logan is used to giving orders, but now he’s forced to ask for help as he searches for a way to regain access to the dark magics that made his privileged life possible.

While their aims diverge, Adne and Logan find themselves following similar paths. Each finds that they may be able to use the other to their own advantage. But trickery and manipulation create a dangerous game and neither Adne nor Logan can be certain who will win.

Picking up right where BLOODROSE left off, SNAKEROOT follows two characters readers know well from the original Nightshade trilogy.  Adne, one of the Searchers and Ren's half-sister, is plagued by nightmares featuring the evil Bosque Mar, now trapped in the Nether and looking for a way out.  Adne's power draws him to her, and he wants, more than anything, for her to come to the side of dark magic and free him. Logan Bane, the Keeper who was once set to rule Calla and Ren's Haldis pack, is one of the few of his kind left, after he helped Shay close the rift between our world and the Nether.  But he wants to re-open that rift so he can re-create Guardians and reclaim the Keepers' magic. He raids the Rowan Estate to find what he needs to perform dark, ancient rituals, but Bosque Mar has turned his back on Logan for his treachery, and without his help, Logan is lost.  The two teens are both battling Bosque Mar--one who wants to be left alone, and the other who wants help.

Andrea Cremer is the internationally bestselling author of the Nightshade series, which includes the critically acclaimed Nightshade, Wolfsbane, Bloodrose, Rift and Rise. She went to school until there wasn't any more school to go to, ending with a Ph.D. in early modern history--a reflection of her fascination with witchcraft and warfare--and taught for years at Macalester College.  She grew up roaming the forests and lakeshores of northern Wisconsin, but now lives in New York City, where she roams the sidewalks and riverbanks of the concrete jungle she calls home.www.andreacremer.com  @andreacremer
Posted by Jennifer @ YA Sisterhood at 8:46 AM