Chosen Ones by Tiffany Truitt 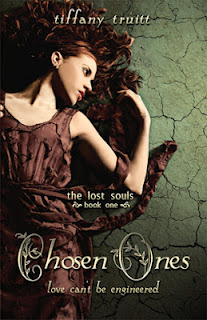 Chosen Ones by Tiffany Truitt

What if you were mankind’s last chance at survival?

Sixteen-year-old Tess lives in a compound in what was once the Western United States, now decimated after a devastating fourth World War. But long before that, life as we knew it had been irrevocably changed, as women mysteriously lost the ability to bring forth life. Faced with the extinction of the human race, the government began the Council of Creators, meant to search out alternative methods of creating life. The resulting artificial human beings, or Chosen Ones, were extraordinarily beautiful, unbelievably strong, and unabashedly deadly.

Life is bleak, but uncomplicated for Tess as she follows the rigid rules of her dystopian society, until the day she begins work at Templeton, the training facility for newly created Chosen Ones. There, she meets James, a Chosen One whose odd love of music and reading rivals only her own. The attraction between the two is immediate in its intensity—and overwhelming in its danger.

But there is more to the goings-on at Templeton than Tess ever knew, and as the veil is lifted from her eyes, she uncovers a dark underground movement bent not on taking down the Chosen Ones, but the Council itself. Will Tess be able to stand up to those who would oppress her, even if it means giving up the only happiness in her life?


Set in a post-apocalyptic America, Chosen Ones follows Tess into the dark world of the chosen ones, genetically engineered superhumans, complete with strength, intelligence, and good looks who are programmed to hate humanity’s downfalls.  In light of the war that was destroying the world, Americans put all their wisdom and resources into creating this race meant to protect us, but, will their programmed hatred of us be our own undoing?  As Tess falls deeper and deeper into their cruel world, she discovers a conspiracy that will shake the foundation of their world.  What will happen when the truth comes out?


I loved the idea behind the Chosen Ones—I mean, who hasn’t at one time or another, wondered if technology would bring forth the end of humanity?  Am I being melodramatic here?  I’m gonna go with no…after all, if I was the only one who ever ventured into this type of thinking, then we wouldn’t have movies like Terminator or The Matrix, or books like Chosen Ones!!!  Technology is both light and dark; and I love when authors bring forth the darkness that can come from too much power in machines.


But, the themes of science are not the best part of the book.  For me, the best part was the references to Frankenstein.  I might be biased because in my own book that I am currently writing, I also use quotes from Frankenstein.  However, I just love that the parallel is there between the ugly and grotesque monster created by Dr. Frankenstein and the beautiful and strong chosen ones.  They are completely the opposite in every way—Frankenstein’s monster wanted to be gentle, but through difficult circumstances, he was forced to become a monster.  The chosen ones care nothing of gentleness—they are there on a mission and the mission is the only thing that matters.  I loved seeing how the two books relate!


If you’re not a person that likes to dissect the different themes of a book, you will still enjoy this book because the characters are great!  I loved Tess as a heroine—she’s smart and doesn’t take any flack from anyone.  At times Tess is not smart and she finds herself in difficult and dangerous situations—but isn’t that realistic?  We don’t always do the smart thing—many times our emotions guide us, and for Tess, her emotions are her guiding light.  She might try to suppress them and feel nothing because its easier that way, but I think that shows her true feelings and passions even more.  It’s great to watch her grow and learn to love, even when she knows it could bring great pain.


And then there’s James…the blue-eyed, imperfect (because of a small scar) chosen one who will completely steal your heart.  He struggles with his true nature, and he wants more than anything else, not to be Frankenstein’s monster.  The insight we see into him as we get to read his notes on this book are captivating and heart-wrenching.  Plus, I love a guy that fights against his nature!  He’s not your dark, mysterious and hauntingly handsome ya boy.  You know where he stands from the beginning—you see his struggle and his desires all over him, and that just makes me love him more!  He’s a sweet-natured, loving guy who was built to be a killer—I can’t wait to see what happens when he’s pushed to his limits.


The only flaw in the book is that the flow can be slow at times.  Instead of your steady built up to a climax followed by a resolution, there are quite a few up and down moments…more like multiple hills on a roller coaster instead of one big hill.  But, that truthfully didn’t bother me that much.  From other reviews, many people are complaining about the lack of background for why the war started, etc.  That, again, didn’t bother me that much.  I mean, America’s a post-apocalyptic wasteland—and the afterward is where the story lies.  So who cares how it got that way??


Tiffany Truitt created a world where nothing and no one can be trusted—where the future is wasting away and freedom is a relic of the past.  This debut novel is gut-wrenching and heartfelt, and I can’t wait to find out what’s next for Tess and James.  Full of secrets, lies, and betrayal; Tiffany Truitt creates a world where desperate humans become Dr. Frankenstein, creating a monster no one saw coming.
Posted by Jennifer @ YA Sisterhood at 12:01 AM