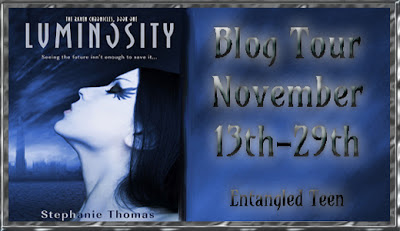 Today we have the pleasure of hosting the Luminosity Blog Tour!  I was so excited to get to read Stephanie Thomas's book!!!  Be sure to check out my review below, and don't forget to enter to win an ecopy and Bea's necklace in the Rafflecopter's at the bottom of this post.  PLUS...keep scrolling after this post to see the OPAL TRAILER from Entangled and Jennifer L. Armentrout.
***************************************** 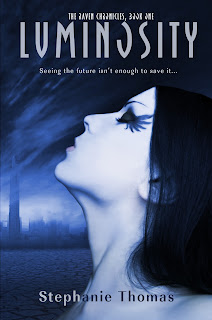 
From the moment I read the blurb about this one, I was hooked.  What’s not to love?
A dystopian society—check
Mysterious villains—check
Dangerous dream boy—check
And then when the cover was revealed, I wanted to read it even more!  This cover is absolutely gorgeous, and I still can’t take my eyes off of it!


Enter a world where death is everywhere, where mystery abounds, and where love and hate are two halves to the same whole.  A thrill ride of a story, Luminosity won’t just bring you to the edge of your seat, it will tip you right over!


I was intrigued by Stephanie’s world because it seemed like it was set out of place and out of time.  It’s a world where paranormal powers exist and are commonplace, yet revered and feared.  It’s a world that rose from the ashes of the past only to find itself, once more, on the brink of destruction.  What I find most interesting is how it feels like there are no good guys.  The story takes place from Beatrice’s point of view (she’s a Seer), so we get a biased view of the world.  Now I think it’s a biased view, not a truthful view.  Beatrice doesn’t know much about her enemy, the Dreamcatchers, and as a result, we know little nothing about them either.  All we know is that the Seers want to kill them and the Dreamcatchers want to kill the Seers.  So that is why I say there are no good guys.  There is so much mystery surrounding their world that we know very little about why they hate each other.  Because of this, you are always on edge, wondering when a truth will surface—and when it does, whose truth will it be?  And can it even be called truth?  Stephanie’s world is a game of cat and mouse, but the question is--who is the cat and who is the mouse?


Beatrice was an unusual heroine because I felt like she wanted to do good, but she was pulled into a bad situation and didn’t know how to fight back.  She is revered as one of the greatest Seers, yet she is unsure of herself and unsure about what she really wants.  I liked that even though she was powerful, she was still weak and vulnerable in some aspects of her life.  However, there were times when I got annoyed by her because I felt like she was being too naïve.  She was too trusting, to a point where she would trust people pointing a gun at her head.  At these points, I wanted to whack her upside the head and yell, “What are you thinking??”  Still, I was captured by her struggle because she was unaware that she was walking such a dangerous line between protector and betrayer.


So…I know what you are wanting to know.  The guys, am I right?  There are two in this book, Gabe and Echo; and they couldn’t be more different.  Gabe is Beatrice’s best friend, but they are starting to become more than that.  I truthfully didn’t like Gabe that much because I felt he was too fickle and sensitive.  He likes Beatrice, but when Bea pays him little attention because her mind is on the war (seriously, whose mind wouldn’t be on the war?), he got all huffy and pouty about it.  Still, they had some very sweet and sincere romantic moments.


And Echo…the Dreamcatcher.  I like Echo because I always fall for the mysterious bad boy, even though we don’t really know if Echo is the bad guy.  He speaks in riddles (hot!), but he seems to know exactly what Bea needs.  They are drawn to each other like a moth to the flame, and its possible, they just might be the death of each other.  But this is what makes their relationship so compelling.  It’s built on trust when there should be none between them.  It’s raw and emotional, yet at times void of feeling.  If ever there was a roller coaster of a relationship, this would be it!  But who doesn’t love a good roller coaster?


Overall, this was a unique and enjoyable read.  There were times when the action was slow and I found myself wondering when things were going to pick up, but then the last 25% of the book came along and it was fight after fight, kiss after kiss, revelation after revelation.  I will warn you though, be ready for some gruesome and very sad moments.  There were deaths and murders that were extremely upsetting to me as a parent because Stephanie did not shy away from child death.  So, put your tough skin on to read this one.


I’ll leave you with one of my favorite quotes from the book, and be sure to purchase your copy today!