Waiting on Wednesday: Ashes on the Waves by Mary Lindsey

Waiting on Wednesday is a weekly meme hosted by Jill over at Breaking the Spine. It spotlights books that have not yet been released, but ones that you should pre-order today! This week's book that we are anxiously awaiting is ASHES ON THE WAVES by Mary Lindsey.  ASHES ON THE WAVES releases on June 27, 2013 from Penguin/Philomel. 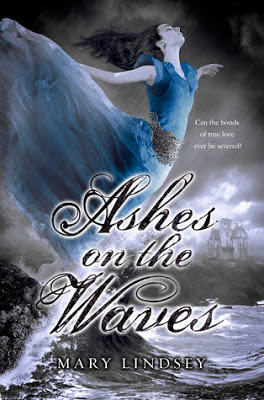 Liam MacGregor is cursed. Haunted by the wails of fantastical Bean Sidhes and labeled a demon by the villagers of Dòchas, Liam has accepted that things will never get better for him—until a wealthy heiress named Annabel Leighton arrives on the island and Liam’s fate is changed forever.

With Anna, Liam finally finds the happiness he has always been denied; but, the violent, mythical Otherworlders, who inhabit the island and the sea around it, have other plans. They make a wager on the couple’s love, testing its strength through a series of cruel obstacles. But the tragedies draw Liam and Anna even closer. Frustrated, the creatures put the couple through one last trial—and this time it’s not only their love that’s in danger of being destroyed.

I have been dying to read this since February when I first discovered it!  I mean, based on Annabel Lee by Edgar Allan Poe?  Win!!  I am a huge Poe fan, and I always made sure to teach The Raven and Annabel Lee in my classroom.  And now, we have a novel based on it.  I can't stop grinning!

This story sounds dark and beautiful, and I love how Mary has brought in Bean Sidhes and Otherworlders to complete her haunting tale.  Liam and Annabel sound captivating, and their tale of love and tragedy, I'm sure, will be destructive and passionate.

What are you waiting on this week?