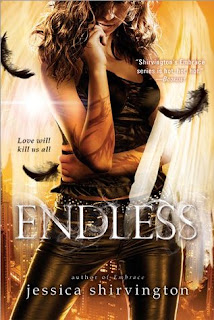 Endless by Jessica Shirvington
Australian copy received from Brianna (Another thanks!)
Release date:  October 1, 2013
Reviewed by:  Middle Sis Jenn
The Sisters Say:  A Rainbow of Excitement, Love, and Loss


I don’t even know where to begin, other than, Jessica Shirvington, you have ripped my heart to shreds!!!!  I don’t even know where to begin to pick up the pieces.  This is one of those series that I am emotionally attached to—putting it in the esteemed company of The Covenant Series, Harry Potter Series, Mortal Instuments and Shatter Me.  I feel like I’ve come to know each and every one of the characters, and each one, good and bad, has managed to wriggle their way into my reality.  This series is unbelievably amazing, and as I much as I want to read what’s next, I wish it would never end.


Be prepared for heartbreak—there is your warning.


Instead of doing a normal review, I have picked out a few of the chapter headings to be my focus.

1.) From Chapter 3, “Can you hear Destiny laugh as she tiptoes toward you?  Destiny is heartless.” –Anonymous


Fate unfolds brilliantly in this fourth installment of the Embrace series.  You finally see more about Nox and Uri, and more importantly, you get more insight into Violet’s Angel Maker.  But these revelations won’t give you peace, not when you see how Destiny careens towards such a devastating cliff.  I loved how Jessica brought in the smallest details from the first books and brought them together, culminating in a remarkable set-up for action, betrayal, and revelations.

2.) From Chapter 8, “No man chooses evil because it is evil…he only mistakes it for happiness, the good he seeks.” –Mary Wollstonecraft Shelley


One of the things I like about Jessica’s story is that no one is without redemption, if they so choose it.  That being said, you just never know who is going to step out of the shadows and show themselves a traitor.  Everyone’s actions are circumspect, and I love the mystery that surrounds the Exiles and Grigori alike.  And Phoenix, of course, the Exile that stole my heart (even though I love Lincoln, too!) shows us the ace up his sleeve.

3.) From Chapter 15, “The pure and simple truth is rarely pure and never simple.”  Oscar Wilde

4.) From Chapter 30, “Let your plans be dark and as impenetrable as night, and when you move, fall like a thunderbolt.” Sun Tzu


The climax of this book is amazing!!!  It was morose and heart-breaking, but the scene that Jessica has portrayed is as vivid as any movie you will ever see.  More so, I love seeing how Violet comes into her powers, and believe me, she does strike like a thunderbolt.

5.) The final quote is the quote at the beginning of the book, but I left it until the end because it illuminates the epicness of what is to come:  “Light and darkness, life and death, right and left, are brothers of one another.  They are inseparable.  Because of this neither are the good good, nor the evil evil, nor is life life, nor death death.”  The Gospel of Philip


Jessica has created a world where light and darkness co-exist and whose to tell which one is more good.  A world where good and evil exist as one, not separate entities trying to expunge the other.  It’s a world where life leads to death, and death may lead to true life.  I love this world, this book, these characters; and if I found myself on the edge of a cliff, being dared by an Angel to jump off; I might just give it a thought (you know, if there was a Phoenix and Lincoln waiting for me on the other side).
Posted by Jennifer @ YA Sisterhood at 12:00 AM