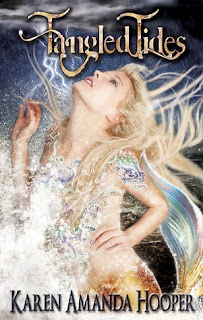 Tangled Tides by Karen Amanda Hooper
Available Now
Published by Rhemalda Publishing
Reviewed by:  YA Sisterhood's Mom, Rhonda
Yara Jones doesn't believe in sea monsters-until she becomes one. When a hurricane hits her island home and she wakes up with fins, Yara finds herself tangled up in an underwater world of mysterious merfolk and secretive selkies. Both sides believe Yara can save them by fulfilling a broken promise and opening the sealed gateway to their realm, but they are battling over how it should be done. The selkies want to take her life. The merfolk want something far more precious.

Treygan, the stormy-eyed merman who turned Yara mer, will stop at nothing and sacrifice everything to protect his people-until he falls for Yara. The tides turn as Yara fights to save herself, hundreds of sea creatures, and the merman who has her heart. She could lose her soul in the process-or she might open the gateway to a love that's deeper than the oceans.


In Tangled Tides, the first book in her Sea Monster Memoir Series, Karen Amanda Hooper creates a unique sea world, complete with social classes, which ironically are based on color. However the world of Mer is not the only world existing in the sea and therein rises the problem. Selkies, Gorgons, Sirens, and Mer--all fighting for dominance, and caught in the middle is Yara, a human with no connections to these sea monsters, or so she thinks. All have been cut off from their original world, all believe Yara is the key to returning, but all have their own ideas of how this can be accomplished. Yet each plan is disastrous for Yara.


For those readers who think this world is not for them, you have “been breathing steadily for far too long” and this book will “take [your] breath away.”  I’m not a big fantasy person either, but the monsters have the ability to take human form, and that is what I like about it.  So you can have the best parts of both worlds—the imagination of the sea world and the realism of the human world.


Hooper dangles the legends and tales of the mythical world, not right in front of your eyes, but in the darkness in secret with just a bit escaping at a time. This builds the suspense from the very beginning and your mind is constantly trying to figure out what mythical creature each character is and what mythical secret they hold.


But perhaps the best part is the romance between Yara and Treygan. Imagine a passion so strong that you can’t keep your hands from touching each other, yet you don’t dare risk it because the last person you kissed had her lips turned to stone. I’m sure you can guess the mythical creature behind this conflict.


And there lies the nucleus of the book—sacrifice.  What will you sacrifice for your people? For your family? For your friends? For love? For life? You will find yourself grumbling as you turn each page, “Yes, Yes, Yes” followed by “No, No, No” as you are wrapped up in the character’s decisions, and literally pushing and pulling the book, trying to force or stop the character’s actions.


Tangled Tides is well worth jumping in!
Posted by Jennifer @ YA Sisterhood at 12:01 AM