Not A Drop to Drink by Mindy McGinnis 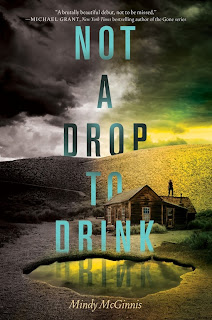 Not A Drop to Drink by Mindy McGinnis
eARC received from Harper Teen via Edelweiss
Release Date:  9-24-2013
Reviewed by:  Middle Sis Jenn
The Sisters Say:  Quick and interesting read, but seemed a bit flat


I already know it’s going to be really hard to write this review because this is one of those books that I enjoyed, but it won’t really stay with me.  I’m feeling kind of neutral about it, and I usually have something very opinionated to say about most books I read.  So, instead of jabbering on about my inadequate ability to form words—I’m just going to try and do a quick survey of my likes and dislikes.


First off, I enjoyed the survivalist idea of the book.  It wasn’t necessarily new or different from other dystopian/apocalyptic books out there, but something about it felt different.  I don’t know if it’s because there wasn’t a big journey or anything, but it felt like I was reading something unfamiliar.  This was definitely a good thing because it kept me interested, and I ended up reading the entire book in 2 days.


I also liked the characters, though I wasn’t blown away.  Lynn was strong and had been taught from a young age to be unsympathetic; so it was nice to see her learning to use her heart as well as her head.  I also found myself enjoying the language barrier between herself and the city family she meets later.  Living in the country, not knowing any other living being besides her mother, she was limited in what technology and slang she understood.  She didn’t even know what flirting was!  So, I was in for a few smiles as she tried to transverse a new understanding.


So, what bugged me?  I am still having trouble putting my finger on it.  The book just seemed flat in its action.  There was action here and there, but there were large periods of time where all we got was the day to day tasks that Lynn had to manage.  Adding Lucy and Eli helped a bit, but there still just wasn’t much substance to the plot.  I like big romance or big action, and that just wasn’t something that happened in this book.


The book was more about Lynn’s discovery of herself more than anything.  I wish there would have been more emphasis on the world, especially how bad the cities are getting.  It would have been great for Lynn to have to travel to get something from a city so that we could see the difficulties of life in this world.


Finally, I wasn’t a huge fan of the epilogue.  It didn’t say how long had passed, and it seemed like everything was wrapped up in a nice little bow.  This just seemed a bit unbelievable to me considering the harshness of life in the rest of the book.


Please don’t take this as a negative review because it’s not.  I consider this more of a 3 star, I didn’t love it, I didn’t hate it review.  I do not regret reading it, but at the same time, I don’t think I would have been missing much had I skipped over it for another read.
Posted by Jennifer @ YA Sisterhood at 9:31 AM

Email ThisBlogThis!Share to TwitterShare to FacebookShare to Pinterest
Labels: dystopian YA, harper teen, Mindy McGinnis, Not A Drop to Drink
Newer Post Older Post Home
Three sisters (and some honorary ones) share a love of YA literature, review new books, and talk old favorites.