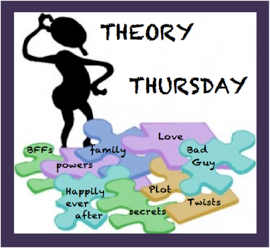 Welcome to a new addition to our blog! Theory Thursdays Theory Thursday is a weekly meme created here at YA Sisterhood because oh how we love predicting what's to come in a series. Every Thursday (hopefully) we'll bring you our theories for what might be happening next in various YA series. All we ask is that you fill out the link widget at the bottom to link our blogs together that way we can all see each others theories! Below is our inaugural post for the third installment of the Hex Hall series. HH3 isn't due out until next March, but as you can tell, we eagerly anticipate the third and final book!
SPOILERS AHOY! BEWARE!!!!
I REPEAT, READ AT YOUR OWN RISK!

Let’s get our Nostradamus on!

Brittany says: Well… we’ll start with the romance because, well, be honest—that’s what we really all care about!!! First up—Cal. Oh Cal. You’re such a good pal. And I will cry if Sophie breaks your heart (Truly, I shall). I think we’ll see a WHOLE lot more of Cal in HH3. In fact, I think for the majority of the book he might even pull ahead in the epic race of awesome boyfriendness race between he and Archer. I think he’ll open up a bit more, and we’ll find out that under that calm, put-together façade that he is super duper in LURVE with Sophie. And to be honest, after Demonglass—I think I might be Team Cal. But do I think Sophie will end up with him? Unfortunately, probably not. But I do think he’ll do something brave and awesome and possibly save her from impending doom, and will end up dying for the one he loves. Or at least that’s how I would do it. But I’m dark, and like to torture myself. *SIGH*
Amy says: You definitely do like the heart wrenching, evil endings, but honestly I don't think Cal would die! It's a little confusing for me right now! I was super duper Team Archer in Hex Hall, but I found myself wanting her to pick Cal in Demonglass! Is there anyway she can have both? They can even have a reality TV show called brother husbands! I honestly think she'll end up with Archer and sweet Cal will end up with a broken heart! This makes my heart hurt, but I think Cal being such an amazing guy will honestly just want Sophie to be happy. Why oh why can't fictional characters be real?!?!
Britt: I feel you, sister (baha-- she really is my sister *smiles*). While we’re on the subject of Cal—I’m thinking that there has to be a whole lot more awesomeness lurking under the surface. Sure, he can heal stuff which = awesome. But why then did the Council want him as bodyguard? Why not just a healer? I’m thinking he’s got some pretty crazy powerful secret that we just don’t know about yet. (And perhaps he will use said crazy powerful secret to save Sophie from certain DOOOOOOOM).
Amy: I also have more questions to exactly why James, Sophie's dad, betrothed her to Cal. There has to be something we don't know there especially when Cal comes out of the Itineris and tells Sophie to go to Aislinn Brannick! Then cryptically says he can't explain now, but she would be safe! And, by the way, that's where your mother is!!! What?!? The Brannick sisters, who were supposedly some huge enemy!!! So yep, there is definitely more to dreamy Cal than we've seen so far!
Now that we know that Sophie's mom is with the Brannick sisters, that Sophie will be safe with them, and that Sophie and her dad both "prefer" the enemy according to Mrs. Casnoff, I have developed all kinds of theories! This is what I think! I think that Sophie's mom is a Brannick. I think that her and James fell in love and tried to make it work, but once James became the Head of the Council he felt it was his duty to sacrifice his happiness for the well-being of the Prodigium. And, that well-being did not include having the Brannicks as inlaws. However, I do think that he was still communicating with the Brannicks and was secretly trying to arrange a cease fire. Cal in someway has to be privy to some of this hence the comments above. Is it possible that Cal is also a Brannick or is in someway connected to them? We don't really know much about his history or where he came from!
Britt: Now let's talk about Sophie and certain doom—the whole having her powers bound kind of sucks. Who will she get to help her release it? I’m not sure…. any chance Alice isn’t dead, just banished to another demon-y realm, and she might be called upon to help?
And now we come to Archer. Oh, Archer. I will admit that I became slightly disenchanted with Archer in Demonglass. After Hex Hall, I'd been head over heels in love with him, but in Demonglass I found myself continuously shouting at an open book, "Man up, and betray the Eye already!" Well... he didn't do that in HH2, but the question remains-- will he in HH3? Well.... I think the answer is an obvious yes. We all know Sophie is going to end up with Archer, and that won't happen until he deserts the Eye. Now, we have to ask-- how long will he continue to be an idiot? Here's hoping it won't take him too long to wise up!
There you have it! These are our best theories for Hex Hall 3. Please share your theories with us! Also, if you would like to be a part of Theory Thursday fill out Mr. Linky below, and it will link your blog up to our blog. Be sure to leave a link up on your blog to ours also!
Posted by Brittany Howard at 2:00 AM