The Vespertine by Saundra Mitchell 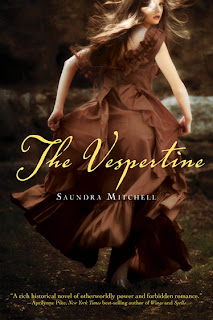 It’s the summer of 1889, and Amelia van den Broek is new to Baltimore and eager to take in all the pleasures the city has to offer. But her gaiety is interrupted by disturbing, dreamlike visions she has only at sunset—visions that offer glimpses of the future. Soon, friends and strangers alike call on Amelia to hear her prophecies. However, a forbidden romance with Nathaniel, an artist, threatens the new life Amelia is building in Baltimore. This enigmatic young man is keeping secrets of his own—still, Amelia finds herself irrepressibly drawn to him.
When one of her darkest visions comes to pass, Amelia’s world is thrown into chaos. And those around her begin to wonder if she’s not the seer of dark portents, but the cause.
The Vespertine
By Saundra Mitchell
Reviewed by: Baby Sister Brittany
Release Date: March 2011 (That’s right! Buy this one now!)
The Sisters say: Sophisticated. Sinful. Sassy.
I was sort of taken back by how much I liked this book. I don’t usually go for historical novels, but this one just reeled me in! Baltimore felt like a nice change of pace when so many historical novels are focused on London or New York. The historical details were fascinating, and I felt fully immersed in Amelia’s world. And my favorite part? THE HUMOR. So often, historical fiction feels stale and stiff, but I distinctly remember laughing so hard in this book that I had to put it down. (Corsets… those things make for some funny happenings).
The paranormal element of Amelia’s visions, though not completely new, felt fresh and interesting. Perhaps it was because her visions weren’t flashes or pictures or movie like reels in her head. They folded out of the firmament at sundown, and I could just picture the swirling golden rays morphing into her visions. And a second paranormal element even finds it’s way into the book in a surprising twist. I wish the second had been a bit more developed, but it added a second layer of mystery and excitement nonetheless.
Nathaniel is everything you could want as the love interest! He’s dark and brooding and mysterious and totally off-limits. He’s a poor, scandalous artist—the exact opposite of the wealthy, upstanding kind of gentlemen that Amelia is supposed to be looking for.
What truly grasped me about this story was really Amelia’s story—and not even her visions. Peel away the fabric of the time period, the gothic setting, and the paranormal twists—and you are left with a girl struggling to find herself while remaining within the confines placed on her by society. Amelia has always been a good girl, and in deed she’s been sent to Baltimore to learn how to be a good woman. But she holds a fascination for the darker side of life—what she calls wicked. She’s a strong female character who feels the world at her fingertips, and her fingers are itching to grasp it. But in her world and her time period, a woman who thinks and acts for herself is sinful. So, Amelia is faced with a decision.
Good girl or wicked girl?
Wicked always wins. ;)
Add this to your To-Be-Read pile today!
Posted by Brittany Howard at 7:21 PM

Email ThisBlogThis!Share to TwitterShare to FacebookShare to Pinterest
Labels: Historical, Paranormal, Saundra Mitchell, The Vespertine, YA
Newer Post Older Post Home
Three sisters (and some honorary ones) share a love of YA literature, review new books, and talk old favorites.