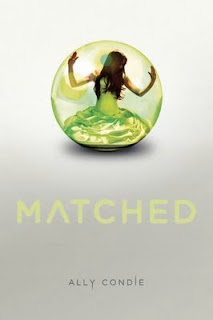 
Cassia has always trusted the Society to make the right choices for her: what to read, what to watch, what to believe. So when Xander's face appears on-screen at her Matching ceremony, Cassia knows with complete certainty that he is her ideal mate . . . until she sees Ky Markham's face flash for an instant before the screen fades to black. The Society tells her it's a glitch, a rare malfunction, and that she should focus on the happy life she's destined to lead with Xander. But Cassia can't stop thinking about Ky, and as they slowly fall in love, Cassia begins to doubt the Society's infallibility and is faced with an impossible choice: between Xander and Ky, between the only life she's known and a path that no one else has dared to follow.


Matched is the first dystopian book I have ever read; and all I can say is….more please! I loved every single page of this book. The first page hooked me and I literally could not put the book down.


Cassia is a relatable, down to “earth”, inquisitive, rebellious, and conflicted teenager who is torn between what she knows and what she wants to know. As she is matched with Xander, her longtime friend, they feel a sense of relief that the society has put them together. Not only that, but they do not have the long drawn out courtship that most matches have to endure. With the society’s mistake with her microcard (showing Ky’s picture) and upcoming death of her grandfather (I definitely cried at that part), she becomes curious if the society’s decisions are right for her. The more she learns and sees, the more I want to tell her to “fight the man”!


Xander…..Xander, Xander, Xander….what can I say about Xander!?!? What a guy! He is loveable from the beginning. Although, I knew he was going to be matched with Cassia, I was holding my breath. He is the typical boy next door. Good looking, caring, cute, athletic, playful, and he’s your best friend. He does have a flaw though…..he plays way too many games! I mean, seriously, Xander, wake up! In my cougar opinion, Xander is definitely crush-worthy. But….then there’s Ky (sigh).

Ky is the mysterious, smooth, sensitive, complicated, romantic, smokin’ complication….oh, and I forgot...

Spoilers ahead! Click below to read the rest of the review! :)

He’s an aberration which means…COMPLETELY OFF LIMITS! Can you say heartthrob?!?!?
Seemingly aloof, he flies under Cassia’s radar, until he appears on her microcard. When that happens, her eyes are open to a whole new world of Ky. As their friendship develops, I wanted to know more and more about Ky. His character has so many layers; I know we have only scratched the surface of him. Their relationship is deep, secretive, dangerous, and exciting. Every time they talked or passed notes, my blood pressure rose, worrying they’d get caught. I have to say, I am a sucker for secretive, forbidden romances. What a great love triangle!

The society and officials make the perfect villain. It seems so innocent at first, but the more you find out the scarier it is. At first, I thought, what a great way to live…. I mean really…your food just shows up….no cooking!!! But, as you go deeper and deeper into the society, the more twisted and dark it gets. The best part is they are so immersed and brainwashed that you do not really know which individual to hate.

There are so many twists and turns in this book that you really don’t know who is higher on the power chain. The love triangle is so developed that I am still torn and am afraid she chose wrong. (Although, I tend to lean more for Xander…it could be because I really like his name) But, on the other hand, Ky really listens to her and they have a deep relationship. What do you do?!?!? Go for the safe guy or the “off limits” one? You can guess which one (Ky) she chose…And right when you are so proud that they beat “the man”, your jaw drops to find out they played right into his hand. WOW!!! Of course, it ends with a huge cliffhanger ending, which definitely leaves you anxiously awaiting the next book. My only complaint about this book is that the second book doesn’t come out for 6 more months which means I have to wait a half a year to continue to fight the society with Cassia and Ky. But, you better believe that as soon as “Crossed” comes out….I will be one of the first to read it!


All in all, I would say that “Matched” is definitely a match made in dystopian heaven! (I know, I just couldn’t resist) ;-)

Posted by AmyG@YA-Sisterhood at 4:24 PM