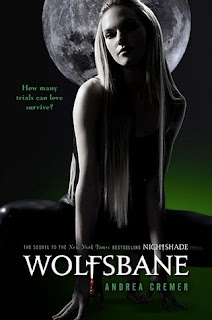 SPOILERS AHEAD!!!! I MEAN IT! EXERCISE CAUTION!


If we were werewolves, this would be the part where the full moon is just barely starting to peek out from the clouds in the sky. The last warning before the change begins... or, you know, before our Wolfsbane theories begin. :)

Alright… here goes, kiddoes. I loved Nightshade, as did my sister Amy. I have no clue why we haven’t written a review yet for the book. We’re idiots like that. But we’ll try and rectify that soon. But for those of you, like us, who have read Nightshade and can’t wait for Wolfsbane—let’s talk! I’m going to warn you now, that I’m Team Ren. In fact, I am so Team Ren that there’s not even a point in adding Team in front of his name, because that implies a competition. And in my head, there’s no competition. Shay is sweet and nice, but Ren is the one who will get your blood boiling! So I can recognize that some of my “theories” might be more like “oh, please, please, please let this happen or I will DIE!!!” So, my first theory is that Calla’s feelings towards Ren are going to grow, which will confuse the heck out of her since she just left everything she knew for Shay. When she was at home, she was being forced to be with Ren, so her frustration cancelled out a lot of the attraction she had to him. When she’s separated from him, I think she’s going to realize that without him, there is a big hole in her life, that Shay just can’t manage to fill completely.


Amy says:
Oh how I love Ren, let me count the ways!!! Great minds think alike and apparently hearts too because I can't get anymore Team Ren than I am right now also! I like Shay, but he's the cute new guy you date who makes you realize how hot and in love you are with the boy next door!!! But enough gushing about the super heartthrob that is Ren and lets get to some theories.

First off, I'll start with relationship predictions. At the end of Nightshade, it seems as if Calla is leaning more toward Shay. However, an overwhelming majority of readers are Team Ren, so I don't think we can count him out just yet. The way Ren saved both Calla and Shay's life gives him super, major bonus points and proves that he's truly in love and not in lust with Calla. You don't let your "fiance" run off into the night with another guy in that fashion unless its true love! Also, I think by Ren saving them, it is going to throw doubts into Calla's mind that maybe she picked the wrong guy or shall we say wolf! Calla being a born "alpha" has the inborn desire to protect. I think Shay needed protecting in Nightshade and that caused them to grow closer. Because of who Calla is, she's always going to lean toward who needs her. Shay needed her therefore, she's Team Shay. Now however, in Wolfsbane the tables will be turned. Ren and the rest of their pack, needs her protection, so I think that will cause a shift in her. She will now desire to be back with Ren and her pack because she feels the need to protect them as is an alpha's role.


So clearly... we're both hoping for Ren, Ren, and more Ren in Wolfsbane. Now I'll attempt to put aside my infatuation and focus on other plot-points. I think we're going to have our worlds rocked by all the new information we find out about the searchers and the guardians. Just like Calla-- we're a little unclear about just who is the bad guy in this situation. I think we're going to learn a lot about both sides-- good and bad, but I have a feeling we'll be left just as unsettled. I don't think there will be any clear cut right and wrong. I think both sides will be able to justify their side in the war, but the question is which side will Calla choose? There is one party that I definitely don't trust, and that is of course the Keepers of the Guardians-- the Banes and Nightshades. I have a feeling that they're going to play dirty in an attempt to get Calla and Shay back. I know they're going to attempt to use Ren against her (though I think he's strong enough to fight back). I'm afraid that they'll manipulate the rest of the Haldis pack, too (so scared for them!). And now to what might be the biggest issue-- who is Shay? And how does he fit into the puzzle? The keepers worked so hard to protect him, and then it seemed as if they were willing to let him die. What changed? Did they uncover the truth of the prophecy? Or were they telling the truth when they said they intended to switch him out for someone else in the trial at the last minute? I have a feeling that neither side is really looking out for Shay's best interest. I think he is the tipping point. Perhaps he's a weapon of some kind or will help one side defeat another. Are both sides just using him to further their own gains? (Oooo...Not to sound cruel, but maybe he'll die as a result in book 3, and Calla will be free to be with Ren!!! Did I go to far there? Whoops. Like I said. Ren-obsessed).


Amy says :
You're desire of the dark endings is coming out again! For you, someone always has to die! I agree, I can't make any definite predictions because I feel like we haven't been given quite enough information for that yet. Obviously, in a war there are always innocent casualties, and with that we know that both sides will be guilty. However, which one is the greater evil? Just taking what we know right now, the Guardians seem like with lack of a better term the "bad guys". The Keepers have entirely rewritten the history of the Guardians in order to maintain control of them. We find out that Ren's mom tried to lead a revolt and ended up being killed for it, then the evidence of the rebellion was secretly swept under the rug. So, its very obvious that the Keepers need the Guardians to protect them, or they wouldn't go to such lengths to keep them ignorant of the past. However, what do they need protection from, just the Searchers or is there something bigger afoot?

We did see the Searchers try to kill Calla, and we've heard that they are not to be trusted. However, I don't think we can believe anything the Guardians have said about the Searchers. We don't really know who exactly the searchers are or what they "search" for, but they've obviously been after Shay. Shay is obviously the "chosen one", but for what or to do what we don't know yet. The guardians want him dead and the searchers want him alive. It will be interesting to see who exactly Shay is and what is so special about him.


In conclusion, I think its easy to say that Wolfsbane will end with another cliffhanger. We'll learn a little more but because its only the 2nd book, I don't think we'll find out much more. We'll see more romance and more Team Ren vs Team Shay. We'll see the beginnings of a war and find out more about the mystery man who is Shay. We will fall more in love with Ren with every page...oh sorry, that's me & Brittany. But all in all, we're in for another action packed, roller coaster ride with a few of our questions answered, and WE CANNOT WAIT!!!

Britt says:
So... all in all... I'm not gonna lie... we don't know a whole lot. We have a lot of questions, and not as many answers as we'd like. (We do know that we like Ren, that much is obvious). Help us out by telling us your theories/questions/hopeful longings for Wolfsbane! If you do decide to post your own theories to your blog, please drop your link in the box below, so we can take a look!

Posted by AmyG@YA-Sisterhood at 3:00 AM