We, at the YA Sisterhood, love us some Abbi Glines. You might recall our review of her first book Breathe or her next book The Vincent Boys or her next book Existence. Did we mention we love how prolific she is too! And her latest book actually features a character we already know and love-- Marcus Hardy from Breathe! BECAUSE OF LOW is told in alternating POV between Marcus and the girl who catches his eye, Willow or Low. If you liked Breathe, you'll definitely like this one! And if you enjoyed the way Vincent Boys was aimed at a slightly older audience, you'll like it even more! Without further ado... here's a sneak peak at Willow from BECAUSE OF LOW. Be sure to check out the bottom of this post for more info about the tour and how you can win a copy of all of Abbi's books! 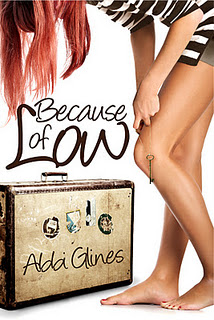 Marcus Hardy had hoped to enjoy a year away at college while he put the summer he’d rather forget behind him. But instead, he’s jerked right back to the coastal town of Sea Breeze, Alabama due to a family crisis. His dear ol' dad found himself a girlfriend only a few years older than Marcus. So now his sister needs help dealing with their mother who is mentally falling apart. The only bright spot to returning is the fascinating red head who sleeps over several times a week. The problem is she's sleeping in bed with his new roommate, Cage Watson.

Email ThisBlogThis!Share to TwitterShare to FacebookShare to Pinterest
Labels: Abbi Glines, Because of Low, Because of Low Blog Tour, Blog Tour, Contemporary
Newer Post Older Post Home
Three sisters (and some honorary ones) share a love of YA literature, review new books, and talk old favorites.