Welcome to the YA Sisterhood and this leg of the DARK DAYS OF WINTER Tour, the BIGGEST Dark Days Tour yet! We're so excited to have Jodi Meadows on the blog, author of the recently released INCARNATE from Harper Collins. You all might be sick of hearing us talk about how much we love her, and INCARNATE, INCARNATE'S cover, and INCARNATE'S Book Trailer.... BUT TOO BAD! Because we're here to give this fantastic author and her book even more love! If you missed our review of INCARNATE, feel free to check it out now! And if you think we're biased, just check out one of more than 300 5-star reviews on Goodreads (and the book only came out Tuesday)! 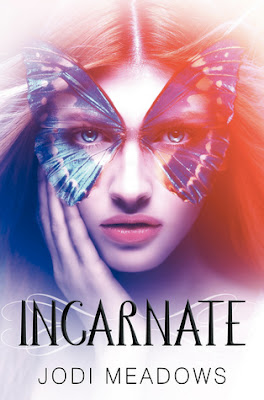 NEWSOUL
Ana is new. For thousands of years in Range, a million souls have been reincarnated over and over, keeping their memories and experiences from previous lifetimes. When Ana was born, another soul vanished, and no one knows why.

NOSOUL
Even Ana’s own mother thinks she’s a nosoul, an omen of worse things to come, and has kept her away from society. To escape her seclusion and learn whether she’ll be reincarnated, Ana travels to the city of Heart, but its citizens are suspicious and afraid of what her presence means. When dragons and sylph attack the city, is Ana to blame?

HEART
Sam believes Ana’s new soul is good and worthwhile. When he stands up for her, their relationship blooms. But can he love someone who may live only once, and will Ana’s enemies—human and creature alike—let them be together? Ana needs to uncover the mistake that gave her someone else’s life, but will her quest threaten the peace of Heart and destroy the promise of reincarnation for all?


YAY! We're with you there! We loved fictional boys so much that we started a Tournament just to fangirl over them! :)

What is your BIGGEST regret or mistake?
I've made a lot of mistakes, but I try not to regret them. Every choice I've made -- good and bad -- has shaped who I am now. But the biggest mistakes . . . probably involve (non-fictional) boys and kissing.

What is the BIGGEST secret you've kept from your parents?
Wait, is my mom reading this? No? Okay, mumblemumble years later, I still haven't told my mom about the times I drove off school campus during my free period so I could kiss my boyfriend. (Clearly real boys were a problem for me. Fictional boys were often better influences.)

Haha! As sisters, we definitely deal in secrets, too. Amy's biggest secret didn't stay hidden from our parent's long, thanks to me (Baby Sister Brittany). Hey-- what are little sisters for?

What is your BIGGEST joy or achievement to date?
Oh man, I have a lot of them! But in keeping with the theme of boys . . . marrying my husband. Who, by the way, is not made of fiction. Just so we're clear.

Congratulations-- on the marriage and the fact that he's real. :)

What was your BIGGEST hurdle or fear while writing or trying to get INCARNATE published?
The fear that no one would ever say yes, and that I'd never achieve my dream of sharing my stories with strangers.

Well... we're certainly glad that Harper Collins said yes, and you got to share your stories with us!

Which represents the BIGGEST challenge-- Dragons or Sylphs?
Tie! As the author, I can't commit to Team Sylph or Team Dragon. I love (and fear!) both of them equally.

Music is such a strong theme in INCARNATE, what or who is your BIGGEST musical obsession?
Currently, Snow Patrol, Ludovico Einaudi, Ólafur Arnalds -- wait, by biggest was I supposed to choose only one?

Well... since we've only heard of Snow Patrol, looks like we might be discovering some new artists!

What book has been the BIGGEST influence in your life thus far?
Oh there are SO many books that have affected my life, but coming down to it . . . probably WAIT TILL HELEN COMES by Mary Downing Hahn. My 7th grade English teacher read it to the class and that was the first time a) I realized writing was something people could do as a job, and b) the fantasy/paranormal/magic in books could be REAL, rather than explained away by SCIENCE.

We are big supporters of Fantasy being REALITY. We're still waiting for our Hogwarts letters.

Jodi Meadows lives and writes in the Shenandoah Valley, Virginia, with her husband, a Kippy*, and an alarming number of ferrets. She is a confessed book addict, and has wanted to be a writer ever since she decided against becoming an astronaut.

Be sure to check out the next stops on the Dark Days of Winter Tour.