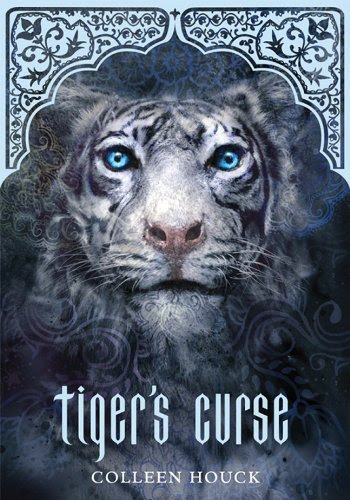 Passion. Fate. Loyalty.
Would you risk it all to change your destiny?
The last thing Kelsey Hayes thought she’d be doing this summer was trying to break a 300-year-old Indian curse. With a mysterious white tiger named Ren. Halfway around the world. But that’s exactly what happened. Face-to-face with dark forces, spellbinding magic, and mystical worlds where nothing is what it seems, Kelsey risks everything to piece together an ancient prophecy that could break the curse forever.
Tiger’s Curse is the exciting first volume in an epic fantasy-romance that will leave you breathless and yearning for more.

I'm not even sure how to start this review because honestly, I'm still speechless, and frankly mad at myself for not reading this sooner.  I've seen this book dozens of times in bookstores and have always thought, "oh, that looks good, I need to read that."  However, for some reason I just never did.  At least, I am on the bandwagon now though!  Better late than never!  If any of you are epic fantasy fans, then here is another series for you!  I love Harry Potter, Chronicles of Narnia, and Lord of the Rings.  All of these have that feel of a hero on his quest, and the Tiger's Curse is no different.  There are so many amazing qualities to this series thus far and all I've read is book 1!

Tiger's Curse is one of those few books that has the perfect balance of adventure and romance.  Usually in fantasy, the adventure is overflowing and the romance is sparse.  However, Tiger's Curse has both and has it abundantly!  Some of the sweetest scenes I have ever read in YA lit are in this book!  If you look up the definition of dreamy in the dictionary, you will find a picture of Ren!  Sorry for that totally lame last statement, but it is so true.  A Indian prince from centuries past, stepping into modern day times with the courtly manners of bowing and kissing hands had me swooning on every page. Trust me people, if you read this, you will be a melty puddle on the floor right along beside me.  Who would want a vampire or werewolf when you can have a Tiger!?!

**************SLIGHT SPOILERS**************
I do have to mention one thing about Kelsey though.  She does question why Ren would want to be with someone like her.  I know that is totally normal for a teenage girl, but honestly I wanted to hit her on top of the head with this massive book!  The book needs this struggle because it wouldn't be realistic to have a happily ever after from the first page, but I just wanted to yell at her to grab Ren and never-ever let him go!

Epic fantasies are what drew me to YA literature in the first place.  There are so few out there that are truly in that EPIC category that there is a constant longing in my soul for more!  There's only so many times I can reread Harry Potter, (Well, that's a lie, I can never read HP too many times!)  From the moment Colleen started building her world my soul let out a huge sigh of relief.  This is what I had been missing!  In Tiger's Curse there is a dreaded curse that has plagued Ren and his brother for 300 years.  Ren has been on a centuries long quest to break this curse.  However, the curse is magically binding and it takes an amazing amount strength, bravery, intelligence, and a special chosen one to even have the chance of being able to break it.  This is a saga about a hero on his voyage to save his own life and to win the heart of the woman he loves!  This book is long, which is another reason for rejoicing!  It's not a book I could skim through like I do a lot of the books I read.  I had to read and read carefully because I wanted to break the curse right along side Ren and Kelsey.  I can't remember the last time I felt this way, and I am alive with giddiness!  It's like I am home again after being away for a long time!

We've seen London in Harry Potter, Middle Earth in Lord of the Rings and Narnia in Chronicles of Narnia.  In Tiger's Curse it is India!  I have never had a desire to go to India, but I do now.  In Tiger's Curse, I took a trip to India and not the India that the tourists know, but the India of old that has been forgotten by most.  An India sprinkled with hidden temples of ancient gods riddled with deadly traps that unless you are a Tiger, are unsurvivable.  It was beautiful and exotic, and I can't wait to go back in Tiger's Quest.

I honestly must make myself stop right now!  I want to save some of my other loves of this book for my upcoming reviews of the next books in the series.  I will warn you that you better have the next book waiting for you because you are going to want to rip into as soon as you read the last page of Tiger's Curse!  Guys, I really cannot tell you how excited I am about this series and how terrified I am to keep reading knowing that not all the books are released yet!  It's one of the great things about series, but also the wait can be so unbelievably heart wrenching!  It's fun and nourishing to my soul to have another series that reminds me so much of my first loves in literature!  If you are like me and adore epic fantasies that make you think, cry, cheer, and become slightly obsessive then what the heck are you waiting for?!?! Go read this book!

Posted by AmyG@YA-Sisterhood at 12:01 AM