In dystopian America, sixteen-year-old Kaleigh finds out quickly what having a big mouth and not enough brains to keep it shut can earn you. A one-way ticket to the work camps that no one even knows exists.

Nuclear war has ravished the nation, and a century later, the survivors are living in an entirely new world. In a society where everything is decided for you, from where you work to who you marry, dissidence is not taken lightly.

But, even inside the camps, Kaleigh’s fiery spirit refuses to be extinguished. In a single moment of defiance, she manages to spark a riot that ignites into a full-blown rebellion.

With growing numbers counting on her, not just for their freedom, but for their very lives, two different boys vying for her heart, and trouble brewing from within the camp itself, can Kaleigh find a way to step up and become the leader everyone is counting on her to be, or will even the most carefully laid plans come crashing down around her?
When I read the synopsis of this book, I could not wait to get my hands on it.  Being a big fan of this genre, it did not take me long to completely devour the book.  Ms. Canosa brilliantly blends duty, honor, and love in this unforgettable story making it a "must read" for 2013!

First of all, I cannot tell you how much I love the protagonist, Kayleigh.  She is daring, dangerous, snarky, and incredibly brave.  Kayleigh is willing to risk everything for her friends and for justice.  After finding herself in a work camp for spouting her mouth off,  she is quick to make friends and not accept the status quo.  Not only does she figure out how to question the society she lives in, but she finds herself the leader of a rebellion.  Kayleigh is strong, quick-witted, and an awesome character.  It is hard not to love her!

Let me tell you about the boys in this book....oh, the boys!  First, the boy next door, Peter who I fell head over heels with from their first conversation.  He loves Kayleigh's spirit and does everything to fight for her.  Oh, I love him.  But, then there is Conner.  Hot, hot, cocky Conner...Wow!  He is strong and fierce, yet tender and sensitive at the same time.  He, too, is willing to risk everything for love.  It really is hard to pick a team.  I love them both!

All around Dissidence, is a book that will keep you guessing until the very end.  It literally left my heart racing and breathless.  I am so excited about this book being released and encourage everyone to put it on your TBR list!

An amazingly snarky protagonist, two hot boys, a mass rebellion, and an ending that will blow your mind, are the perfect ingredients that make Dissidence the next big thing in YA.  Buy it. Read it. Love it. 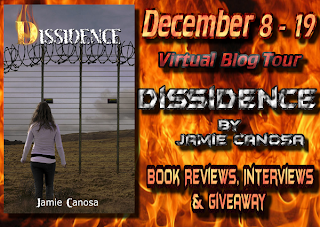 Here are the next stops on the Dissidence blog tour:

a Rafflecopter giveaway
Posted by Beth at 12:00 AM

Email ThisBlogThis!Share to TwitterShare to FacebookShare to Pinterest
Labels: Dissidence by Jamie Canosa, YA Sisterhood
Newer Post Older Post Home
Three sisters (and some honorary ones) share a love of YA literature, review new books, and talk old favorites.