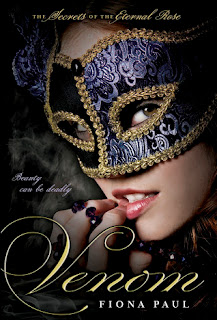 Venom by Fiona Paul
ARC received from Penguin at ALA
On Shelves Now
Reviewed by:  Middle Sis Jenn
The Sisters Say:  Vivacious, Virulent, and Vicious


Fiona Paul’s Venom is dazzling!  Set amongst the foggy streets of Venice, Venom will ensnare you in a web of deceit, where passion and purity are pushed to their limits, and where the wrong move might land you in the hands of a psychopath.


I enjoy historical romances, but it is not really one of my favorite genres.  That is perhaps why I have had this ARC for months but just now read it.  Boy, do I regret letting it sit on my shelf!  Venom sucked me straight into Renaissance Venice—the gorgeous dresses, the forbidden trysts, the dangerous streets---I could go on and on about the amazing history that Fiona brought to life.  I really think the historical aspect was my favorite part of this book, and Fiona did such a great job of integrating the past and the city into her story.  I loved reading about the marriage customs and the expectations of nobles versus commoners.  I had heard all these things before, but having them brought forth within a storyline was enchanting.


I actually really enjoyed Cassandra as the female main character.  Before I read this, I assumed she would be the typical snobbish, dull noblewoman that we think of from the Renaissance; and at first, Cass follows these very rules.  However, soon, her true nature shows; and we see her start to push back against what society expects of her.  It wasn’t long before I got the rush of excitement like I was the one sneaking out in the middle of the night to consort with a handsome artist instead of Cass.  I loved seeing her break free of her confines and start to question everything she has been told.  She became a strong female lead who was determined to find the truth, no matter the danger; and I found myself cheering her along.


For all you teachers or English majors or anyone else who finds themselves picking out themes and motifs—I loved the caged bird motif!  Falco’s nickname for Cass is “Starling,” and on more than one occasion, he mentions how she is a bird beating her wings against her noble cage.


Oh Falco, Falco!  He’s an artist (I say this with the pronunciation of ‘are-teest’ because it just feels like its how Falco would say it), and a commoner, but he doesn’t let that stop him from going after the girl.  I like his resilience and tenacity—and I love how he doesn’t hesitate to put Cass in her place when she’s being a spoiled little rich girl.  At the same time, he’s sensitive and sweet, caring for Cass and her safety.  I immediately fell for Falco, even though I knew he was hiding something.  Full of charm and charisma, Falco definitely adds some spice to this story.  I loved the scenes with him, and when he wasn’t there, I felt myself missing him!  I can’t wait to find out what’s next in Belladonna (book 2).


The only downfall for this book was that it started out a little slow.  I think I was 100 pages in before I really was taken with the characters.  BUT, at that point, I couldn’t put it down.  I had to know what was going to happen next, and I just couldn’t wait to discover the identity of the killer.  This book was not predictable in any way for me.  I kept trying to guess who the stranger at the masquerade ball was—I was wrong.  I tried to guess who the killer was—I was wrong.  So, Fiona did a great job of throwing in red herrings and what not to throw me off my track.  It was great to be kept guessing up until the very end.


Venom was brilliantly written, full of breath-taking imagery and poetic motifs.  Fiona knows how to take you from merely reading a book to living it.  Full of seduction, secrets, and sinister violence, Venom will challenge everything you know about Renaissance Italy.  I will say, Fiona knows how to bring history to life.


Content Warning:  Sexual content.  There is a scene where Cass witnesses sexual acts while in a brothel.  I would recommend this for high school age or higher.
Posted by Jennifer @ YA Sisterhood at 12:01 AM