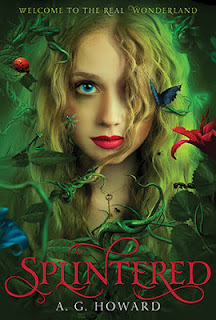 Splintered by AG Howard
eARC received by Amulet Books via Netgalley
Release Date:  January 1, 2013
Reviewed by:  Middle Sis Jenn
The Sisters Say:  Sinister, Surreal, and Seductive
This stunning debut captures the grotesque madness of a mystical under-land, as well as a girl’s pangs of first love and independence. Alyssa Gardner hears the whispers of bugs and flowers—precisely the affliction that landed her mother in a mental hospital years before. This family curse stretches back to her ancestor Alice Liddell, the real-life inspiration for Lewis Carroll’s Alice’s Adventures in Wonderland. Alyssa might be crazy, but she manages to keep it together. For now.
When her mother’s mental health takes a turn for the worse, Alyssa learns that what she thought was fiction is based in terrifying reality. The real Wonderland is a place far darker and more twisted than Lewis Carroll ever let on. There, Alyssa must pass a series of tests, including draining an ocean of Alice’s tears, waking the slumbering tea party, and subduing a vicious bandersnatch, to fix Alice’s mistakes and save her family. She must also decide whom to trust: Jeb, her gorgeous best friend and secret crush, or the sexy but suspicious Morpheus, her guide through Wonderland, who may have dark motives of his own.


I’m just going to go ahead and brand this one of the BEST OF 2013, before 2013 even starts!  Splintered is that good!  I’ve never before wanted to jump down a rabbit hole so whole-heartedly!  A.G. Howard morphs Lewis Carroll’s classic into something new and deadly—a place where the macabre and morbid rule the world, where reality and fiction are juxtaposed in a tangle of webs, and where love and betrayal go hand in hand.  So close your eyes and take a leap down the rabbit hole—when you open them again, you will be in a world of wonder and chaos.


“Now, stop thinking like a human  Nethering logic resides in the hazy border between sense and nonsense.”  ARC, location 1891-1892


I was never a huge fan of the original classic, but this re-telling just blew me away.  I love how A.G. took parts of the old story and interwove them to create something new and modern.  Her world was captivating and creepy—and I could just see this playing across the big screen.  Seriously, if I had to choose any book to be a movie, this would be it!  It’s got the madness that would make it part horror and the sexiness that would bring teeny-boppers, twenty-somethings, and older YA readers straight to the movie lines.  A.G. took the setting of Wonderland and turned it into a macabre dance---the flowers have become killers, the white rabbit has become a humanoid/rabbit type skeleton, and the cards are vicious monsters.  Take Caroll’s Wonderland and throw it off kilter—somewhere between psychotic killer and mushroom hallucinations—and then you have A.G.’s world.  Terrifying and beautiful sprinkled with a dash of insanity and a pinch of sex.


I really loved Alyssa—Alice’s great, great, great granddaughter.  She is tasked with going down the rabbit hole to fix Alice’s mistakes.  She’s strong and confident, with a morbid fascination with bugs.  I loved the attention to her clothes—a punk style that fits the strangeness of Wonderland perfectly.  She was always getting new “costumes,” and I really enjoyed seeing her personality show through each of them.  Plus, they added to the setting and the surrealism of the world.  Alyssa is smart and witty, and even those she is vulnerable in some aspects of her life, she doesn’t let that waiver her conviction.  She presses forward, no matter how unnerving or creepy the creatures or her tasks may seem.


Oh the guys!  The guys in this one are great!  There’s Jeb, Alyssa’s best friend from the mortal realm (who she has a complete crush on), and then there’s Morpheus, her estranged friend from her childhood who is now her guide through Wonderland.  Jeb is your typical best friend with a crush—he is a little shy and doesn’t know how to say what he wants.  That part of him is endearing, but unfortunately, I found him a bit boring.  He was predictable and plain compared to Morpheus.


I think many readers will like Jeb better than me, but what can I say, I like the macabre Morpheus.  He says it best himself: “Mysterious.  Rebellious.  Troubled.  All those qualities women find irresistible.”  ARC, location 3982-3983  He hit the nail on the head with that one!  Those are the YA guys I tend to fall head of heels for!  A.G. describes Morpheus as similar to The Crow (you know the old 80s movie with the guy in leather and a white-painted face?)—and I loved The Crow!!!  “He’s a contradiction:  taut magic coiled to strike, gentleness at war with severity, a tongue as sharp as a whip’s edge, yet skin so soft he could be swathed in clouds.”  ARC, location 1837-1838  Morpheus is full of charisma and is extremely skilled in seduction.   I found myself wishing that Alyssa would just throw herself on him so they could have a hot and steamy, make you sweat scene.  He is what happens when you make the macabre sexy.  Long dark hair that falls into his face, dark smoky eyes that pierce your soul, black tipped wings that will sweep you off your feet, and the heart that is always too hard to read.  Yum!  I couldn’t get enough of Morpheus, and I am hoping beyond all belief that A.G will write a sequel just so I can have more of him.


This could be a stand-alone novel, but it was also left a little open where a sequel can be written if A.G. Howard decides to in the future.  (Please, Please, Please!)


I could go on and on, but I won’t!  Instead, I will urge you to buy this book when it comes out in January!  If you’re looking for something different, and are a fan of dark, gothic-like novels, then this will be perfect for you!


I’ll leave you with a final quote I loved: