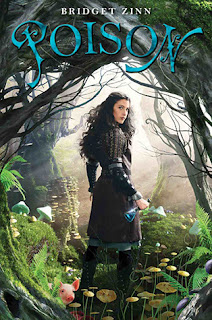 
From the first look at Poison, I really didn’t know what to expect.  The blurb bore a striking resemblance to my favorite childhood cartoon, The Black Cauldron, though, and I just had to read it to see if it was similar.  I mean, both have the enchanted pig, the riffraff guy, and the beautiful girl.  After reading Poison, I will say that I loved it!  It was very similar to my fave cartoon in some aspects, but there were parts of the story, like Kyra herself, that was all Bridget’s imagination.  I’m so sorry that Bridget passed away before getting the chance to write a second novel in this world.


Bridget’s world was delightful—full of intrigue, deception, and romance.  I loved the “kind of” magic that blanketed the world.  What do I mean by that?  I mean that the world wasn’t so full of magic like your Harry Potter’s or the like, but it had touches of it here and there.  Kyra’s potions were the most interesting—she had potions for everything—from ones that open doors to ones that turn people into wooden statues.  It was fascinating to see Kyra work and create new and old combinations.


Now, let’s get to the fun part—Fred.  I liked him the moment he first entered the story—which was hilarious by the way.  I had to stop a few times to let myself catch my breath because the picture that Bridget painted was so alive and over the top.  It’s been a while since I have read this book, and I can still picture Kyra (in her undies) and Fred’s reaction to them.  The romance in this book was so sweet and innocent, which makes this book perfect for MG readers, but also YA readers who enjoy the high fantasy world.  It was a nice change of pace, and I admire Bridget for keeping the romance enjoyable yet clean.


Fred was such a fun character—he was rough and tough, and he didn’t let anyone push him around.  He provided some comic relief from Kyra’s circumstances, and he really helped to liven up the storyline.  There was just something about him, and I can’t quite put my finger on it, but he was just the kind of guy everyone likes.


Kyra was such a great heroine, and that’s a big thing for me to say, because if you follow my reviews, you know it’s hard to impress me with a great heroine.  But Kyra did it!  She’s the super kick-butt assassin who knows that her best friend (the future ruler) must die or the kingdom will pretty much die a slow and agonizing death.  So, she has to make a brutally difficult decision.  I admire that she was strong enough to make that decision, but at the same time, she wouldn’t just push aside her guilt.  I felt every emotion along with her, and I really felt like I knew Kyra by the end of the novel.


Bridget Zinn’s debut novel is thrilling and passionate.  Based in a world where magic looms around every corner, where truth and deceit are separated by a thin line, and where love might be the only thing that can conquer evil, Bridget’s book will open your eyes to a new kind of fantasy.  There are plenty of plot twists and turns (some predictable, some not so much), and there’s a little something for everyone in this wonderful tale of murder and truth.