Sweet Peril Blog Tour: Review and Deleted Scene!!!!!! OH, and Plus a GIVEAWAY! 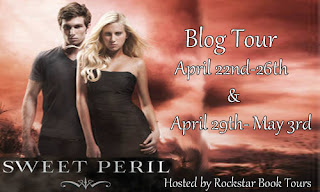 Today is the kick off for the Sweet Peril Blog Tour!!!!  We love Wendy Higgins so much for this amazing book, and of course, the amazingly sexy Kaidan.  So many great things to share with you today!

First off, we have a Deleted Scene to share!  Whoop Whoop!
Then, it's Review time!  (Squeal)
And Finally, Giveaway Time!  You definitely do not want to miss out on this amazing giveaway!

This post is long, but it's well worth it!

Shout out to Rockstar Book Tours for hosting this great tour and to the lovely Wendy Higgins for creating some amazing posts for the next two weeks!

Here's the rest of the Tour Stops:

**********************************
Okay, so are you ready for the deleted scene????  Yay!  Here's a few words from Wendy first.
My Writing Process and Cutting Scenes
I tend to be an “overwriter.” I write WAY more than I need to when I first draft, and then I end up cutting scenes and even whole chapters. It’s a crazy mess. Every now and then there are scenes that hurt to cut, and this is one of them. When I decided Anna would be traveling to the Damascus, Syria in the Middle East with Kopano in Sweet Peril, I did a ton of research. Tons. I love writing about different cultures, but my biggest fear is getting something wrong and accidentally offending someone. During my studies of Damascus I came across many blogs of travelers who shared heartwarming stories of people they’d met. It was those true stories that inspired this scene. Anna is trying to fit in by wearing a hijjab covering on her head as she goes in search of a fellow Nephilim girl, Zania. This particular scene was too light, and it took away from the tension of the chapter, so it had to go. But it makes me happy. I hope you enjoy. :-)
DELETED SCENE FROM SWEET PERIL BY WENDY HIGGINS
I set out through the side road that our hotel was on, heading for a busier street that I’d need to pass through to get to Zania’s area. The main streets were roughly paved, but worn and crumbling in places, which added to the old-world appeal for me. I couldn’t keep a smile from my lips as I made my way into the Souk, a bustling open-air market. Children ran rampant, laughing and hollering.
I planned to keep my head down, but I found myself hit with exotic, mouth-watering scents and brilliant sights begging to be seen. Shopkeepers called out in exuberant voices and used grand hand gestures, laughing or looking serious as they haggled prices. Unlike many crowded cities, the auras in this Souk were pleasant and content.
I hadn’t eaten yet. There was a stand up ahead with a sign for hummus. An older woman dressed in an ornately embroidered flowing dress and hijjab was working it, and as I approached her, I suddenly felt shy. I only knew a small spattering of Arabic that I’d learned in the past week. I ordered hummus and flatbread in my broken Arabic while she brazenly looked me over. She said something to me in Arabic and gestured to my headscarf as a puff of orange excitement filled her aura.
“Do I have it wrong?” I asked in English. She elatedly said something else, then called over her shoulder into the room behind her. A preteen girl came out, and other women peeked their dark heads through the door. None of the younger ones wore head coverings.
“Ah,” said the young girl, smiling. “Yellow hair, she says. You are blonde, no? Like in Hollywood?”
“Oh!” I felt somewhat relieved, pushing the hijjab forward a little more, since it must have slipped back to show my hair. “Yes, I have blonde hair, but I’m not from Hollywood.”
The girl continued to smile, relaying the conversation to the older woman, who turned to me and clapped her hands, beaming to reveal a missing tooth on bottom.
“Come, come!” She grabbed my arm.
“She would like you to have tea,” explained the girl.
“Oh, thank you.” I was flattered by the invite. I shot a quick look over my shoulder at Kope as the woman pulled me past the food cart and racks of throw rugs. He gave a shrug and grinned.
The room was small and simple. The older woman spoke to the girls, waving her arms as she gave them orders. I stayed still when she turned to me and took the liberty of removing my headscarf and examining my hair, running her fingers through it with appreciative noises.
“Very beautiful,” she said, emphasizing each syllable with a slight roll of her tongue.
The room filled with more females, each commenting on my hair and sometimes feeling it.  Someone brought me a plate of soft, warm flatbread and spiced hummus. It was honest-to-goodness one of the best things I’d ever tasted. They laughed when I closed my eyes and said, “Mmm.” The preteen set a tray of tiny glasses on the table, each filled with steaming tea. She handed me one and I took it, nodding and giving my thanks. It was hot and sweet with a sprig of mint.
A group of children rushed in, crowding around me and bringing a sea of noise and yellow auras.
“You have sweets?” asked a boy missing his two front teeth. His mother mussed the top of his floppy, black hair and berated him.
“It’s okay.” I laughed, swinging my book bag down and pulling out a handful of snack-sized M&Ms and Skittles. “May I?” I asked his mother. She nodded. The entire room was lit up with orange and yellow aura swirls.
Little hands eagerly grabbed the offered candies before the older woman shooed them all out.
After a humorous conversation in broken English, the oldest woman rewrapped my hijjab super tight. I regrettably wished them all good-bye, thanking them for the food and tea, and receiving very loud kisses on both of my cheeks. I couldn’t wait to tell Patti about the hospitality of the Syrian women.
Once I’d made sure Kope was behind me, I started down the street again, staring ahead at the distant views of dry mountains.
********************************** 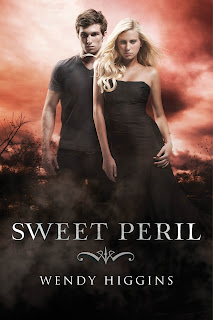 Sweet Peril by Wendy Higgins
ARC received from HarperTeen
Release Date:  4-30-2013
Reviewed by:  Middle Sis Jenn
The Sisters Say:  There Are No Words…Nope, None.  It’s that dang good!
Have you ever been asked if you could switch places with any literary character, who would it be?  I’m sure we all have (or we’ve at least wanted to) at some point in our lives.  Now, normally, I would try to be all classy and say someone like Elizabeth from Pride and Prejudice or Juliet from Romeo and Juliet (except for the whole suicide thing) or some other girl from some other great epic romance.  But you know what Elizabeth and Juliet?  Meet my foot as I kick you both to the curb so that I can switch places with Anna.  Because, Mr. Darcy and Romeo—they don’t hold a star compared to Kaidan Rowe.
Big build up, huh?  I just needed you to understand the epicness of this star-crossed romance.   And one more thing:
WENDY                   KNOWS                    ROMANCE.
SERIOUS.                JAW-DROPPING            ROMANCE.
I don’t know how she does it, but she just knows exactly how to write a guy that will sweep you off your feet, no matter what kind of guy you normally go for.  So, if you’re a romance fan (or a Kaidan fan), then be prepared for every look, every word, and every sound coming from Kaidan to drill its way permanently into your memory (and womb).
I love that Wendy is a bit more daring in her romance, too.  The romance is much more steamy than in your regular YA book, and I love that she chooses to dance around the boundaries previously set.  I mean, just as much happens in Sweet Peril as does in many other YA books, but Wendy just knows how to stage it where it’s revealing enough to drive you insane with swooniness, but not so much to send those who prefer there to only be “fade to black” scenes to start throwing temper tantrums.  Trust me, you are definitely going to want to re-read the swoony scenes.
When I first read this blurb, I was a little worried about most of the book just following Anna and Kopano, fearing we would see very little of the other characters I love so much.  But, that doesn’t happen at all.  We still get to see Patti, Kaidan, Blake, Ginger, and the other nephs; and you get a little more background into their lives and hopes with each scene they are in.  However,  much of the book is focused on the relationship between Anna and Kopano.  I actually really enjoyed these scenes because I really got to see another side of Kopano.  And I love him so hard!  He’s so torn and Wendy brings his struggle alive throughout their trips around the world.  If you weren’t a fan of Kopano before, you definitely will be after reading this.
We see an entirely new side to Anna in this installment, too.  She is being forced to work in order to stay safe, and you can see how those actions are starting to chip away at her strength and confidence.  But she still manages to stay strong in the face of temptation.  But she’s not this uber-strong angelic being.  She is quite literally like the cartoon character who has the devil on one shoulder and the angel on the other.  She is constantly fighting her need for drugs on one side and her need to physically be with Kaidan on the other.   Her struggle shows her weaknesses, and it makes her all the more believable.
One of the best things about Sweet Peril is it doesn’t fall into that sequel slump that we see so often.  The action was fast-paced, and I never found myself bored.  I did struggle at times because I wanted more Kaidan (but that’s just me being selfish).  But other than that, I flew through this one, not being able to flip the pages fast enough.  Wendy’s angel/demon world-building is beautiful, and her world and characters will leap off the page straight into your heart of hearts.  Plus, I love that she manages to end it without killing us.  It’s an ending that still makes you want to jump in a time machine to find out what happens next, but it’s not an ending that makes you want to research medieval torture devices to show the author just how much pain you’re actually in.
Sweet Peril is brilliant and beautiful.  Wendy manages to highlight both the light and the dark sides of human nature, along with that grey middle ground where love and hate, truth and deceit, right and wrong, and heaven and hell collide. I, for one, would gladly dive head first into her broken and crumbling world.
***************************************
And GIVEAWAY TIME!!!!
All giveaways are US Only, and only one entry per household.
Must be 13 or older to enter.
Books will be sent directly from the publisher, while all other prizes will be sent separately.
The Rafflecopter is shared through all tour stops.
The prizes:
1 Grand Prize Giveaway - engraved “Kaidan Rowe Sweet Peril” drumsticks, fruity scented lip balms, a paperback copy of SWEET PERIL and a signed SWEET PERIL bookplate
5 Winners for - a paperback copy of SWEET PERIL and a signed SWEET PERIL bookplate. 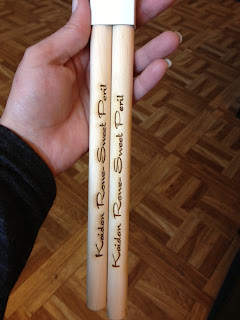 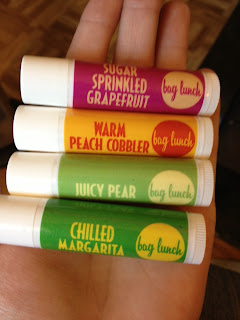