The Art of Wishing by Lindsay Ribar 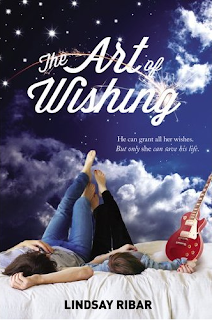 
Thank you Penguin and LibraryThing for this ARC!


When I first read the blurb for this book, I was really excited because…genies!  I’m always a sucker for a new paranormal type of character because the YA genre is overrun with the same old, same old vampires, werewolves, and demon hunters.  So, when I saw that this book was all about genies (and a cute one at that), I jumped at the chance to review it.  After reading it, I’m kind of in limbo because it was cute and a quick read, but it was lacking that spice that makes a book glow.


The Art of Wishing has a contemporary feel to it with a little paranormal twist.  I liked the contemporary aspect of it because it was light-hearted and fun, and it’s nice to be able to read something that is simple—something that is different from what I normally read.  I really enjoyed the genie aspect, too.  Oliver was full of fun facts, but I wish there would have been more depth to the genie mythology.  The book ended like there is going to be a sequel, though, so maybe it will come in the next one.


I enjoyed Margo and Oliver, even though I wasn’t blown away by either of them.  They were fun together, and they seemed to mesh well.  However, I had a difficult time believing their ages.  Margo was supposed to be 18, but I felt like she was closer to 15.  I mean, at one point, she calls Oliver her boyfriend, and they do this geeky, “Did you just call me your boyfriend?” type scene that was straight out of a teeny bopper movie.  They were both old enough to act mature and more socially aware, but their actions and dialogue at points just seemed childish.


I kind of felt like the romance was bland, too.  I have a hard time with romances where the “I love you’s” come out of nowhere and they don’t match their actions.  I wanted to feel Margo and Oliver’s love, not just hear about it.  I needed to believe it, and while it got better near the end, I still didn’t feel like it was real.  I think that has a lot to do with the immature dialogue between the two, though.


My favorite part of this story was the music aspect.  Margo is an extremely talented singer, and I loved when she was at play rehearsal.  The descriptions of her songs and how she became the character were great, and I could really see Margo shine on the stage.  I also loved when she was in her element writing her own music.  You could see the real Margo so much better at these times, and I really felt her love and passion for music in these scenes.  Had this same passion come across in her feelings for Oliver, then I would have been sold on the romance in this book.


Overall, this was a cute read, and I’m glad to have read it.  It was a nice break from the angsty ya romance novels I tend to gravitate towards, but at the same time, it kind of made me miss those books.   I think many people will enjoy the carefree tone and the innocent romance, even if I didn’t really jump for it.