Ashes on the Waves by Mary Lindsey 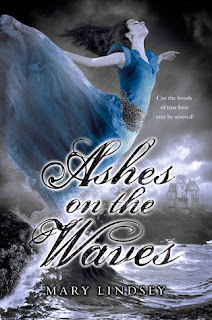 Ashes on the Waves  by Mary Lindsey


The Sisters Say:  Gut-wrenching and unique; a tale of blissful woe and beautiful agony


I was sold on this book the moment I saw that it was a modernization of Edgar Allan Poe’s poem, Annabel Lee.  I love Poe’s dark nature, and I definitely saw whispers of his inner demons in Mary Lindsey’s rewrite.  Lindsey’s world was dark and gritty, full of open deceit and hatred.  Lindsey created a terrifying story set in our world, but not of our world; where ancient beliefs and discrimination hold sway over the balance of life and death.


I love the new wave of gothic romances that are sweeping the YA shelves this summer.  This is by far my favorite sub-genre of YA, and I will read any others in this area with open arms.  I love the poetic writing that brings these ominous worlds to life; and there is a part of me that embraces that fact that good does not always win over evil.  It’s more truthful and in a way, makes the books all the more poignant.  I praise Mary Lindsey for her willingness to delve into the deep recesses of human nature, bringing to light that death is what makes life worth living.


My favorite part of this story was the setting—which seems to be what I love the most in the gothic genre.  Ashes takes place on a secluded island that, although present day, lives like it’s the 1800s.  There is new electricity or plumbing on most of the island, and the citizens have created a Lord of the Flies type of existence.  Murder and deceit are not punished as civilized society would have it, instead, lynchings and other atrocities are accepted.  The island was frustrating and eerie, but the perfect place for a tragic love story.


I did have some sort of trouble with what seemed like insta-love.  I say “seemed like” because Liam and Anna knew each other when they were kids, so it wasn’t like it was love at first sight.  But I did feel like they fell so quickly, but I guess that keeps with the poem, so it was appropriate.


Liam was unlike most of the guys in YA literature, which was refreshing, although he didn’t blow me away.  He is soft-spoken, kind and gentle, and extremely shy.  Again, this keeps with the 1800s feel of the setting, though as the relationship between him and Anna is more like an old-days courtship than a modern romance.  Their love was true and you could see that in the selfless acts they committed, but I wish there was more passion along the way.  It seemed too tame for me, and not tame in the sexual sense.  I mean, tame as in, very few passionate embraces and kisses were actually described.  It was more like her kiss blew me away and that was it.  I wanted to feel the emotion in the act.


I liked Anna, although again, I felt like she needed more emotion.  She is broken like Liam, only in a completely different way.  They come from two different worlds, but their desperation to be acknowledged brought them together.  I liked that Anna didn’t back down from a fight, even when it was the entire town against her.


Overall, this was a great tragic romance with very few flaws.  Mary Lindsey created a story of star-crossed lovers that will rival even the greatest of loves, and stand up to the darkest of fates.
Posted by Jennifer @ YA Sisterhood at 12:01 AM