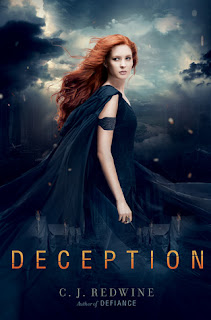 Deception by C.J. Redwine
On Shelves NOW!!  (As in Today!)
ARC received from CJ, thank you!
Reviewed by:  Middle Sis Jenn
The Sisters Say:  Gripping, Suspenseful, and Heart-breaking


***This is a review of the first half of the book as I just got my copy!


I just love this world!!!!  I was hypnotized by Defiance—a world that seemed futuristic, yet somehow lost in the past; a Commander as evil as the sun is bright; a love that has awoken a purpose; and an unkillable beast that haunts the underground.  CJ’s dystopian world is imaginative and terrifying, and I am captivated more with every turn of the page.


This sequel starts pretty much right where the last book ends, and I like that very little time has passed.  Straight off, we see the animosity and fear that has settled in the hearts of the survivors, and I have enjoyed seeing how everyone reacts to the realization that they are no longer under the Commander’s thumb.  Some of the women are finally starting to shed their old ways, and many of the men are learning that oppression is not the norm.  While I do like seeing deeper into this newfound society, I have noticed that the plot is slower than the first book.  This is because we are getting a more involved look at the characters, but I do wish that there would be some more action to move the growing relationships along.


Rachel is just as broken as she was in the last book, and while I like that this hardens her and makes her a warrior, I do find myself missing that connection between her and Logan.  The love is there, and you can see it; but it is definitely strained.  I feel like they are disconnected, and I just keep waiting for something horrible to happen because they aren’t being straight with each other.  Still, Rachel is a kick a** character, and I am having a blast seeing her stand up to even the strongest of men.


I just love Logan, and he’s not the type I normally fall for.  I tend to like the bad, mysterious guys; and Logan is not that.  He’s sincere and sweet, and he knows nothing about playing the games that bad boys do.  He’s just that sweet guy that knows how to steal your heart.  I love him so hard!


One thing I do miss is the tension and hatred that the Commander instills when he shows up.  I’m a little over 200 pages in, and he has been seen on a horse, like twice.  I want his anger and hatred to fuel the action, and it just isn’t there.  Now, that doesn’t mean there isn’t some good action.  There is a mystery in the group of survivors that needs to be solved or people will die (or continue to die), but it just doesn’t add the suspense and malice that the Commander did in the first book.  I’m definitely ready for a stand off between him and Rachel.