Living with Jackie Chan, by Jo Knowles
Candlewick Press
Available Now
Reviewed by Honorary Sis Sarah P.
The sisters say: heartwarming and funny as heck! Read it whether or not you've already read Jumping Off Swings. 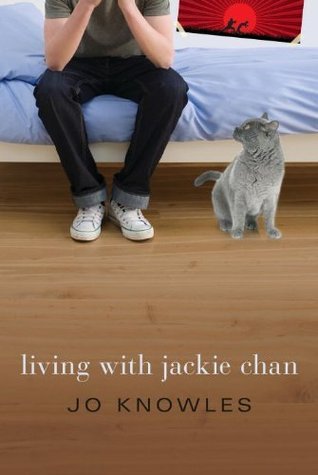 After fathering a baby, a teenager moves in with his karate-loving uncle and tries to come to terms with his guilt — and find a way to forgive.

This isn’t how Josh expected to spend senior year. He thought he’d be hanging out with his best friends, Dave and Caleb, driving around, partying, just like always. But here he is, miles from home — new school, new life, living with his Jackie-Chan-obsessed uncle, Larry, and trying to forget.

But Josh can’t forget. So many things bring back memories of last year and the night that changed everything. Every day the pain, the shame, and the just not knowing are never far from his thoughts. Why is he such a loser? How could he have done what he did?

He finds some moments of peace when he practices karate with Stella, the girl upstairs and his one real friend. As they move together through the katas, Josh feels connected in a way he has never felt before. He wonders if they could be more than friends, but Stella’s jealous boyfriend will make sure that doesn’t happen. And maybe it doesn’t matter. If Stella knew the truth, would she still think he was a True Karate Man?

Readers first met Josh in Jumping Off Swings which told the story of four high school students and how one pregnancy changed all of their lives. In this companion book, they follow Josh as he tries to come to terms with what happened, and find a way to forgive.

It took me too long to read this, because even though the title is genius and the premise is awesome, I hadn't read Jumping Off Swings. And I'm an orderly kind of girl.

Last night I just picked it up and dove in. Because how could I resist that cover, with the cat eyeing Josh as if he might be as big a jerk as he thinks he is? And I'm so glad I did. The book is every bit as amusing as its cover. It's a gift to be able to write funny dialog about serious stuff. And that is precisely the gift that Ms. Knowles has.

What I love about this book is that its characters mostly do the right thing, yet that makes nothing easier! On the first day of school, for example, Josh is horrified when a note falls out of the lunch his well-meaning uncle packed:

What is a true karate man? Remember, and you'll be fine. --L
I crumple it into a ball and toss it in my locker. Here's an answer, Larry: A true karate man doesn't embarrass the crap out of his nephew by leaving a note in his lunch on the first day of school senior year.


Of course, the note in his lunch is not really the problem. It's the shame so deep he sees it everywhere he goes.

This is the sort of book in which every character (even the minor ones) shines with his own light. Even the freaking cat. As uncle Larry over emotes again and again, you'll cringe right along with Josh. His discomfort is as solid as the front stoop of their nondescript apartment building. But even then, you'll still wish you had an Uncle Larry, too. And that's the genius of Living With Jackie Chan. Read it and smile.
Posted by Sarah P at 12:01 AM