Welcome to The YA Sisterhood and round 4 of The Tournament of Heroines, The Fierce Four! Can you guys believe we're already down to the last four? Crazy! Thank you in advance for your participation in our Tournament of Heroines! We hope you make some friends (and not too many enemies), discover some fantastic books, and have a lot of fun!
Some general rules before we begin:
There may be some spoilers in the following post. We've tried to keep it fairly general, but overall, this Tourney will not be spoiler-free. So beware.
Secondly, You are welcome to write your own comments about either character in the comments section, but we will not tolerate rudeness. The minute it crosses over from logical argument into character bashing, your comments will be deleted and your vote canceled.  POLLS WILL BE OPEN FOR 24 HOURS AND WILL CLOSE AT 12:01AM EST ON January 3rd.
And now for the match....

Hey guys, I'm Valerie from StuckInBooks and I'm here to tell you why to
support TeamClary today in the Heroine Tourney! 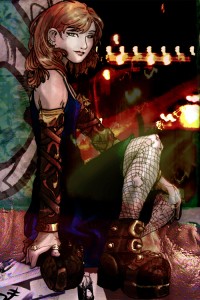 Why Clary is a true heroine: We heard from Jace last time, so I thought maybe we could get a few more opinions from the other characters.

Isabelle: I have to admit, when I first met Clary I wasn't that impressed. She was just this mundane girl who could see us, breaking up my usual fighting pattern with my brothers. Later, when Jace told me she killed a Ravener, I didn't believe it. I thought she was too little and unimpressive, even though she had demon blood scars on her when he brought her in. Then I started to get it. She never backed down. There was never a situation where she was too scared. She fought even though she wasn't trained. She saved my life and my brother's 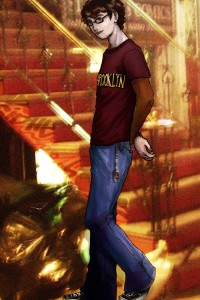 
Simon Lewis: Clary's incredibly loyal. She's been my best friend since first grade. Sometimes she'd drag me places I didn't want to go — like nightclubs — but she'd face off against anyone who ever had a bad word to say about me. She walked into a vampire-infested hotel in City of Bones, and on to a ship crawling with demons in City of Ashes, to save me. She'd walk through fire for me and I would for her. In City of Lost Souls we'll see just how far she'll go to save the ones she loves.

She has a big heart. 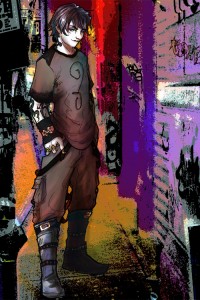 Alec: When I first met Clary, I couldn't stand her. Because of the way Jace looked at her. I was sure she was going to come between us in some destructive way. But then I watched her with the people she loved. I couldn't believe the way she risked herself for Simon — why would you do that for someone who wasn't your family, that you weren't in love with? I started to understand there were other kinds of love and loyalty. She risked everything to save my parabatai, and I can see how happy she makes him. If it was only that, I'd like her, but I like her anyway now, on her own terms. She taught me that love grows from itself: it's not a small thing that you can only give to one person. You can keep so very many people in your heart. 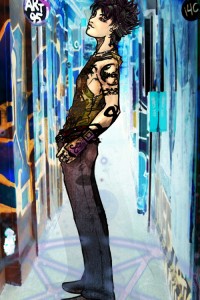 
Magnus: I've been alive a long time. I like to think I have good instincts. I've always had a good instinct about Clary Fray. Sure, she can be reckless, that's the nature of heroes (Achilles was — man, the stories I could tell about HIM) — but she isn't unthinking. She does what she needs to do to get the job done. Breaking apart that ship in City of Ashes with a simple Open rune? That's thinking on your feet. The way she took down Valentine, literally with her hands tied? I always like to see a villain hoist by his own petard. And putting the Mark of Cain on Simon: she remembered one small thing I'd said, and turned it into an iron-clad defense of her best friend. Valentine always underestimated women, and in the end he underestimated his daughter and that was his downfall.

Jocelyn: From the time Clary was born, I was afraid that she'd be endangered by the supernatural world she didn't know about. I lied to her to protect her. I took her memories from her. When she found out the truth, she was angry, and I thought I might lose my daughter. But she's made mistakes and learned from them and she knows other people do too. She's forgiven me and she sticks by me, even if it means putting on a fancy bridesmaids dress she hates! 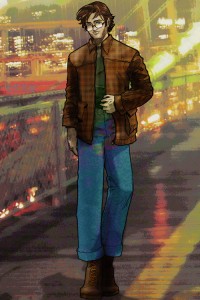 She puts the welfare of others first.


Luke: I like to think that I brought Clary up, even though I'm not her father. I think there was some part of Jocelyn that always worried that Clary would inherit Valentine's darkness, his selfishness. But Clary has always been clear-eyed about putting others before herself. Even when she does reckless things, it's to save other people. When she walked into the Dumont, it was to save Simon. When she Portaled herself to Idris, it's because she knew no one else could save her mother, even though she was risking her own safety and making the boy she loved very angry indeed. And she did save Jocelyn — she got the Book of the White. No one else could have done it. I don't know where she gets her inner strength but I like to think I had something to do with it.

She never gives up.

Raphael: Oh, the red-headed one? Trust me, you're better off giving her what she wants than not. She will keep bothering you until the end of time unless you don't. She annoys me so, especially since that whole Mark of Cain business. Argh! 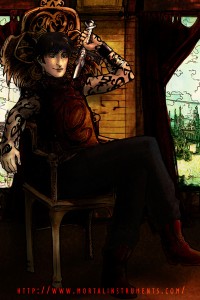 
Jonathan/Sebastian: My father always told me I had nothing to fear from my sister. He said she was weak, like all women are weak. That they need love too much. I listened to my father, and when I met my sister, I saw her through those eyes. I saw the love she had for all those around her, the sympathy, and I called it weakness. I never thought that just as I destroyed the towers of Alicante, as my father and I sowed the seeds of dissent within the ranks of the Shadowhunters, that she would bind them all back together with only a simple spell.
I know better now. I won't underestimate my sister. She is smart and she is determined and she is strong. Like me. We have the same blood and only time will tell if she will be my greatest enemy, or the love of my life.

(Note: all images came from http://mundiesource.net/wpd/the-mortal-instruments/character-bios/)


Yep, I think they pretty much said it all.
But I will add that there are incentives to VOTE for Clary today.
Over at StuckInBooks.com you will find a giveaway for SIGNED copies of all of Cassies books.  AND if Clary wins the whole thing, Cassie will post the Greenhouse scene from Jace's POV!  I SO want that!


I’m Jen, from the blog Unedited, I tweet avidly at @jenunedited, and can be found stalking YOU on facebook… but that’s enough about me. I’m the advocate for Hermione Granger and that’s where my focus is. To stay involved of all things Hermione Granger use hashtag #TEAMHERMIONE on twitter! Include my twitter so I can retweet and connect with you as much as possible!
About Her
So, let’s talk Hermione. You know, the girl who started with two big front teeth and turned into one amazing hottie. This brown hair, brown-eyed beauty can be found wearing the latest fashions when she isn’t in her black robes at Hogwarts. She’s not only bright in the Muggle world (non-magic folks) but can be found at the top of her class in the Wizarding world (magic folks… keep up). She’s known as a bit of a know-it-all but when you find yourself in a bind she’ll be the first with a spell to pull you right out of the sticky situation.
Best Attributes
Hermione isn’t your cookie-cutter heroine. The rawness in her inability to fit in makes her relatable to many girls. She wants to make friends and when she finally does she befriends several different personalities. The beauty of her friendship is the loyalty and trustworthiness she brings to the table. Judgment is left for those who are incompetent of understanding her beliefs. She’s a great support system for the house-elves and will stop at nothing until they’re freed. She’s a go-getter and the term give-up can NOT be found in her vocabulary.
What makes Hermione a true heroine?
Protecting the innocence and taming the guilty is a regular occurrence when hanging with her two best friends, Ron and Harry. From performing spells to hide from her enemies, to flying her way out of a sticky situation on the back of an invisible thestral (only seen to those who’ve witnessed death) this girl puts trust to a whole new level. Her ability to fake her way through a chess game, know how to destroy horcruxes, and learning all about the deathly hallows, she’s your own personal guide in any walk of life. Did I mention her determination... look at her... see what I mean? 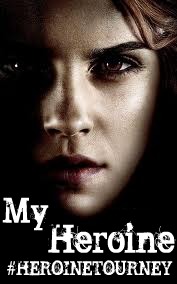 Why should you vote Hermione instead of Clary?

Clary's advocate hasn't explained what makes her character a true heroine, and even though I can't give you a special Jace-ified greenhouse scene, I will share why Hermione should receive the spotlight.

HUMANITY* Hermione visits and listens to Moaning Myrtle even when no one else does.
* She creates S.P.E.W. to help free house elves
* Doesn't allow Ron OR Harry misuse the fact that Harry's the 'CHOSEN ONE'

HER INTELLIGENCE* She created the enchanted coins for easy communication for Dumbledore's Army.
* She helps hunt horcruxes. Without her, Harry & Ron wouldn't have clothes, books, a tent, polyuice potion, medicines OR the extendable charm she used to house these things.

HER BRAVERY* The sorting hat considered putting her in Ravenclaw, but she had just as much bravery as she did brains.
* She was willing to risk punishment to do the right thing (...creating Dumbledore's Army).

She's an all-around gal. A truly great heroine is how one perceives them and though she can be viewed as a 'bossy-know-it-all' she's saved Harry and the gang, a lot.

Thank you, J.K. Rowling, for writing an incredible character. Let's take Hermione to the Final Two.

What else has Hermione taught me?? A few enchantments --> Watch and see!

And just in case that isn't enough, how about Ryan Gosling helping promote a good cause? After all, isn't he sweet to be TEAM HERMIONE? 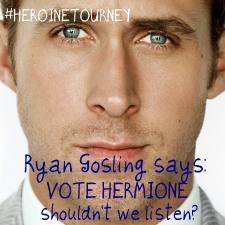 Anything else you’d like to add?
This ROCKSTAR was ready for fame and her name deserves to be on the next bracket. Help me carry our girl to the end and you won’t just dream of pygmy puffs and chocolate frogs… those goodies will be granted.