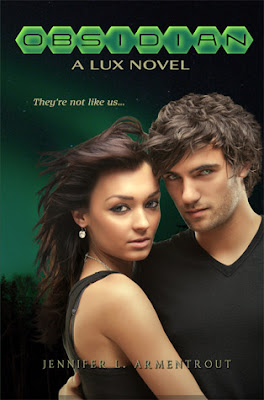 Before I start this review, I just have to take a moment to say how much I love Jennifer Armentrout! She burst onto the scene this year with Half-Blood. In all, I've read three of her books so far, and I am blown away! Seriously, she's earned herself a fan for life, and she's definitely one to watch! Also, this book comes from a new press-- Entangled Publishing. I've read two of their books so far, and I must say that I am impressed. I will definitely be reading more books from them in the future.

When we moved to West Virginia right before my senior year, I’d pretty much resigned myself to thick accents, dodgy internet access, and a whole lot of boring…. until I spotted my hot neighbor, with his looming height and eerie green eyes. Things were looking up.

And then he opened his mouth.

Daemon is infuriating. Arrogant. Stab-worthy. We do not get along. At all. But when a stranger attacks me and Daemon literally freezes time with a wave of his hand, well, something…unexpected happens.

The hot alien living next door marks me.

You heard me. Alien. Turns out Daemon and his sister have a galaxy of enemies wanting to steal their abilities, and Daemon’s touch has me lit up like the Vegas Strip. The only way I’m getting out of this alive is by sticking close to Daemon until my alien mojo fades.

If I don’t kill him first, that is.

At first, I was a little questionable about this book. I mean... it's about Aliens. Not that Aliens are necessarily bad, but I've just never read an Alien story that truly grabbed me. I had high hopes for I AM NUMBER FOUR, but honestly, found it to be lacking.

This book was everything I had hoped Number Four would be, but wasn't! The Alien backstory wasn't cheesy or distracting in the least. And unlike Number Four, Obsidian had the characters, relationships, voice, and pacing to make it a successful, exciting read. It didn't just rely on action scenes (though there was plenty of action). *Imagines Daemon saying, "That's what she said."*

Katy, the main character, is a book blogger. Perhaps, I'm biased, but I thought that brought a really unique aspect to her character that we don't see very often! She's strong-willed and sassy, but with an underlying vulnerability that lends her a real sense of believability as a character. I think Katy makes a fantastic heroine, too. When she discovers the truth about Daemon and his sister, she takes it all in stride. In most books like this, I feel like the female MC discovers the paranormal secret and the danger that is inevitably attached, and then allows themselves to become the damsel-in-distress. Sure it usually requires a bit of bravery to stick around that danger, but that's it. This was not the case with Katy at all. I don't want to give any spoilers away, but she's no damsel-in-distress, I'll say that.

I don't mean to gush, but Daemon is pretty amazing, too. I know that a cute boy doesn't make a book successful, but it certainly doesn't hurt, am I right? Daemon is full of contradictions-- which is what makes him so interesting! He's egotistical, but often plays the silent hero, helping without seeking attention. On the outside, he has the emotional equivalent of brick wall, but you definitely get a sense of the sorrow, loss, and anger that has driven him to that point. He's tough, angry, and at times, downright scary. And yet, he has the most tender, innocent, and dare I say it, CUTE relationship with his sister. It makes him seem both older and younger than he actually is, at the same time.

And lastly, the plot and pacing of this book was exciting and unique, and will make you continue to turn the pages long after you promised yourself you were going to go to bed! The humor that I think characterizes Jennifer's writing, along with the action, keeps the book moving at a steady pace. Even on a second read, I never felt like there was a lull in the story. (Yes, I said second read. Once just wasn't enough).

So in conclusion, I need you to do three things.

3. Love Jennifer L. Armentrout and buy everything she writes forever and ever, amen.