First off, we would like to thank all of our amazing advocates for the YA Sisterhood Tournament of Heroines.  They truly never cease to amaze us with their dedication, their love and their energy!  We are so incredibly blessed with an amazing group of bloggers! We’d also like to thank all the authors who helped make the tournament such a success.  We wouldn't even be having these tournaments if it wasn't for you!   And lastly, we must thank all of you, who voted, tweeted, and supported your favorite characters. You guys were the blood, sweat, and tears of this tourney!
We’ll start by congratulating the advocate who took her character all the way to the end—Valerie from StuckinBooks! You did an excellent job representing, Clary Fray!  Every match was a new surprise!  We never knew who we were going to hear from!  It was so fun! 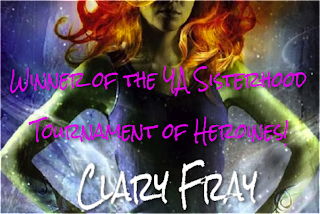 Coming in second was Avery from Avery’s Book Nook!  Avery did a fantastic job defending Tessa, all the way to the finals!  And who can forget that trailer she had in her post!  We will not disclose how many times we watched it, only once, I promise! ;)
These other amazing advocates fought long and hard to get their girls into the Extraordinary Eight:
Penelope from Reading Fever (representing Katniss)  Penelope was an amazing advocate for Katniss!  Just like Katniss, she was lighting twitter and all the Hunger Games fansites on fire promoting her girl!!!


Jen from Unedited (representing Hermione)  Jen was seriously the perfect fit for Hermione!  Jen really is one of the brightest bloggers of her age! (actually all ages)  She even pulled out all the stops with her sexy pics of Ryan Gosling and her debut as a YouTube star!


Momo from Books Over Boys (representing Alex)  Holy smokes, Batman!  What can we say about Momo!  She is a force to be reckoned with.  With her and Alex on the same team, not many daimons or heriones for that matter stood a chance!   She was a fearless leader of the Half-Blood Legion!


Amanda from Letters Inside Out (representing Izzy)  Amanda was another Cassie Clare girl that shared her love of The Mortal Instruments with the world.  She lead Izzy who isn't even the main character of her series all the way to the Extraordinary Eight!  She was an Extraordinary Advocate!


Anna from The Bursting Bookshelf (representing Meghan)  Anna the awesome was representing Meghan!  Her post was beautiful and made us want to go reread all the Iron Fey books all over again!  Not to mention, having Ash and Puck on her team!  Who could refuse?!?!
Julie from My Five Monkeys (representing Tris)  Julie was Dauntless in defending Tris!  She was on Twitter fighting for her girl all hours of the day and night in all of her matches!!!  And she had Four on her side, which makes it a side that we are more than willing to be on!
There were, of course, many fantastic advocates who did not make the top eight.  This tournament all the advocates blew us away!  Seriously, all of them went above and beyond everything, and there is not possible way for us to pick any extra awards without picking an award for all the advocates!  So, because of that...every advocate will receive some token of our appreciation—be it books, ebooks, or some awesome swag.

Many have graciously offered to donate prizes to reward the advocates who took part in the tourney. We've gotten in some great things so far, with more scheduled to come.  This is who has donated so far:  Spencer Hill Press, HarperCollins, Hachette, Simon & Schuster, Jennifer L. Armentrout, Amy Plum, Jeri Smith-Ready, Julie Kagawa, Taryn Browning, Myra McEntire,  Mindy @ Magical Urban Fantasy Reads, Amber and Stacey @ Pageturners, and Julie @ My 5 Monkeys.

We’ll be in touch with our awesome advocates soon to tell you what you’ve won!
Posted by Brittany Howard at 12:47 AM