The Sky is Everywhere by Jandy Nelson 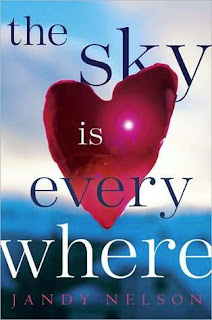 The Sky is Everywhere
by Jandy Nelson
Reviewed by: Baby Sister Brittany
The Sisters say: Emotional, Evocative, Excellent!
Seventeen-year-old Lennie Walker, bookworm and band geek, plays second clarinet and spends her time tucked safely and happily in the shadow of her fiery older sister, Bailey. But when Bailey dies abruptly, Lennie is catapulted to center stage of her own life - and, despite her nonexistent history with boys, suddenly finds herself struggling to balance two. Toby was Bailey's boyfriend; his grief mirrors Lennie's own. Joe is the new boy in town, a transplant from Paris whose nearly magical grin is matched only by his musical talent. For Lennie, they're the sun and the moon; one boy takes her out of her sorrow, the other comforts her in it. But just like their celestial counterparts, they can't collide without the whole wide world exploding.
This book! How to begin a discussion of this book! First, I must say that the vast majority of what I read is fantasy, paranormal, or dystopian. I only read contemporary fiction on occasion, and only then when I’ve heard that it is extremely good. Because frankly—I find myself disappointed in a lot of the contemporary fiction I pick up, so I’m very careful about what I read.  I’d heard this book was great, and the author is an alum of the MFA program in which I’m currently enrolled, so I decided to give it a shot. To say I was not disappointed would be e a vast understatement. The word disappointment doesn’t belong on the same planet as this book!
Let’s start with the formatting/language. You can tell by her prose that Jandy Nelson is a poet. Her images are rich, and her phrasing perfectly chosen. Then of course, there is the fact that she sprinkles small snippets of poetry throughout the text. After the death of her sister, Lennie has this tendency to write poems containing her memories and thoughts of Bailey, and then setting them free in the world. She writes these poems on scraps of homework, disposable coffee cups, brown paper bags, and she leaves them under rocks, in trees, and behind furniture. It was fascinating to see these small pieces of her interspersed between chapters.  This unique idea (and the way it was shown in the text) combined with the raw emotions displayed in many of the poems, made it fascinating and fresh!
Secondly—this book defied all the clichés with which I’ve come to associate stories about grief.  In fact, I think it’s one of the most realistic portrayals I’ve ever read. Nelson perfectly captured the fleeting devastation of grief. There were moments when the tragedy of her sister’s death was eclipsed by things going on in Lennie’s life. In those moments, she experienced emotions other than sadness, only to be sideswiped unexpectedly when the grief came rushing back, now accompanied by guilt for having forgotten to feel sad. Lennie struggles most with what feels like hormonal imbalance after her sister’s death. She finds herself suddenly noticing boys in a way that she never has before, and the awkward, suffocating, and sensual thoughts feel almost comical when juxtaposed against the sadness that she carries with her. Jandy Nelson managed to portray the effect of tragedy on her main character without forgetting that her character was a teenage girl, facing all the things that normal teenagers face, though perhaps heightened by the emotional intensity that has occurred after her loss.
And lastly, I felt  an almost overwhelming amount of empathy for Lennie. I started reading the book late at night, only intending to read a couple chapters, but I ended up reading until 3 am. I finally made myself put the book down after one particularly devastating event in the book. And then, even though I was exhausted and had to be up in a scant few hours, I felt like I was experiencing the same turmoil that I knew Lennie would be feeling if I only gave in and picked up the book to continue reading. I felt the same crushing guilt and fear and hope, that for a moment I almost felt like crying—as if the story were happening to me, and I’d have to face all of Lennie’s hardships when I woke in the morning.
Luckily, I didn’t have to. But I am still puzzled by my strong reaction to this book. There have been plenty of occasions where I’ve lost sleep thinking about the plot of a book  (or I can admit… the love interest), but never have I felt swept away by a character’s emotions in quite the same way.
And for my final statement, I will leave you with this simple statement: The romance in this book is to die for!
Please, please go buy this book. I don’t think you’ll regret it. I know I never will.
(For those concerned with content, this book contains a very honest handling of teenage sexuality and some language.  Like I said, Lennie’s hormones seem to be on overdrive. However, there are no sex scenes.)
Posted by Brittany Howard at 12:09 AM

Email ThisBlogThis!Share to TwitterShare to FacebookShare to Pinterest
Labels: Jandy Nelson, Review, The Sky is Everywhere
Newer Post Older Post Home
Three sisters (and some honorary ones) share a love of YA literature, review new books, and talk old favorites.