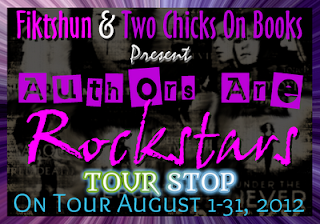 Hey everyone! Welcome to the YA Sisterhood and our stop on the Authors are Rockstars Blog Tour! We are excited to celebrate Ingrid Paulson's awesomeness today! Ingrid is the author of the upcoming, Valkyrie Rising, published by HarperTeen and hitting stores October 9th. There is so much buzz around this book--everyone is ready to get their hands on it! (Seriously...twitter is all abuzz about it). 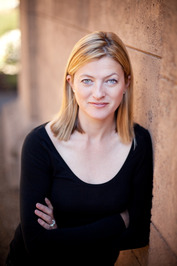 So, why do we think Ingrid Paulson is a rockstar?

*She wrote about valkyries--and lets face it, there aren't enough books about Norse mythology out there!

*She has an oh-so-swoon-worthy romance sprinkled throughout the book! And we at the YA Sisterhood LOVE LOVE LOVE paranormal romance!!!!

*Her grandmother might actually be a valkyrie (per her website)--which we think is awesome! Who doesn't have a crazy family member that just might be a mythological creature? In fact..my 2 sisters and I might be the Greek Furies. (Maybe...watch your back)

*And finally, she wrote and kick butt interview between her leading lady, Ellie, and her resident hottie, Tucker, for us all to read!

Check out the cover and blurb for Valkyrie Rising from Goodreads. 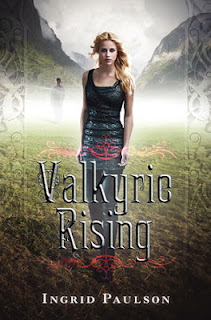 Nothing ever happens in Norway. But at least Ellie knows what to expect when she visits her grandmother: a tranquil fishing village and long, slow summer days. And maybe she’ll finally get out from under the shadow of her way-too-perfect big brother, Graham, while she’s there.

What Ellie doesn’t anticipate is Graham’s infuriating best friend, Tuck, tagging along for the trip. Nor did she imagine boys going missing amid rumors of impossible kidnappings. Least of all does she expect something powerful and ancient to awaken in her and that strange whispers would urge Ellie to claim her place among mythological warriors. Instead of peace and quiet, there’s suddenly a lot for a girl from L.A. to handle on a summer sojourn in Norway! And when Graham vanishes, it’s up to Ellie—and the ever-sarcastic, if undeniably alluring Tuck—to uncover the truth about all the disappearances and thwart the nefarious plan behind them.

Deadly legends, hidden identities, and tentative romance swirl together in one girl’s unexpectedly-epic coming of age.

And now...without further ado...check out this amazing interview! Also...don't forget to fill out the Rafflecopter at the end of this post to win a pre-order of Valkyrie Rising.


ELLIE: Iguess we should introduce ourselves first. Although if you’ve read the book, you probably know more about me thanI’d usually share.
TUCK: You’re blushing.
ELLIE: Thank you for pointing that out.
TUCK: You’ve got nothing to be ashamed of, Ells. You were amazing last summer.
ELLIE: I’m not ashamed—maybe a littleembarrassed. There were a few moments Imight have kept to myself.
TUCK: Hegrins. Whatever. Let them be jealous of that too.
ELLIE: Sherolls her eyes. Anyways, for thoseof you waiting until October 9 to pick up your copy of Valkyrie Rising, I’mEllie Overholt. I grew up in LA with mybrother Graham. Last summer I took atrip to Norway that changed my life.
TUCK: In more ways than one. Ellienudges him across the table. Oh, isit my turn now? Or are you going toelaborate on this amazing life transformation?
ELLIE:Maybe you’re not the only one who likes to keep people guessing.
TUCK: I prefer to think of it is as making lifemore interesting for everyone involved. I’m Tucker. Leans back in his chair with a half wave. I grew up down the street from Ellie andGraham. Until last summer, I thought Iknew everything about both of them. Likehow Graham acts all perfect then turns around and gets away with murder. And how Ellie acts gets shy around mostpeople, yet is anything but. There’salways been more to Ells than met the eye. I just didn’t know exactly how much.
ELLIE: Clears her throat. This is supposed to be about you.
TUCK: I’m here because people want to hear aboutyou. The big hero. Believe me, they don’t want to dive into mypsyche. They’d probably break theirnecks if they tried.
ELLIE: Fine. I’ll introduce you. This isTucker Halloway, who also had a transformative experience in Norway.
Tucker laughs.
ELLIE: He’san incredible soccer player—colleges are already recruiting him. He’s also smart—maybe his grades don’t alwaysreflect it, but he really brought those up last year. Which is what counts. Plus he’s an incredibly loyal friend. He might not be as witty as he thinks, butTuck is an optimist.
TUCK: I’m touched, Ells. Putshis hand to his heart. By all means,continue. Since you’re in the mood tosing my praises, I’ve got some college essays you can tackle next.
ELLIE: Also, he’s also always up to something. Looking for shortcuts.
TUCK: Not always.
ELLIE: She arches one eyebrow. What have you ever worked hard for?
TUCK: Ifthere were PhDs in understanding you, I’d have six or seven by now.
ELLIE: Sheblushes and fidgets with her bracelet. We’re supposed to talk about the book. I jotted down a few questions. Whatwas your favorite part of our trip to Norway last summer?
TUCK: His lips quirk into a dry smile. Let’s see, I’m torn between the time we werealmost killed in a bar brawl and the time we nearly drove off a cliff. I mean, the latter had such a gorgeous viewof the fjords. But it’s also not everyday you see the shy girl from next door let loose on a bunch of homicidalsupermodels.
ELLIE: Come on, the trip wasn’t all bad.
TUCK: No, it wasn’t. Hepauses thoughtfully. I remember somesemi-decent conversations on your grandmother’s grass-covered roof. Under the stars.
ELLIE: Yes, that was semi-decent. You do haveyour moments, Tucker Halloway. We’ll pretend you said rooftop chats from theget-go and ignore your sarcasm. Which isan excellent segue into my next question: if you could change one thing aboutyourself, what would it be?
TUCK: He smilestriumphantly. Nothing. Why mess with perfection?
ELLIE: She sighs. We were on such a good streak with therooftop memory. I should have known itwouldn’t last.
TUCK: Heholds up both hands, placating. I’mserious. If there were something Iwanted to change, I’d just do it.
ELLIE:Everything about that answer is arrogant.
TUCK: There’s a fine line between arrogance andconfidence, Ells. So fine it might noteven exist. Act like you can do something,and people believe you. Fake it till youmake it, Ells. That’s the secret of mysuccess.
ELLIE: Yoursuccess at what, exactly? Evadingreality? Glances down at the page in front of her. What a tragedy—only two more questions. And here I could have sat here all daylistening to your nonsense. Please tryto answer this one seriously. What isyour deepest secret?
TUCK: His eyebrows draw together as he pondersthis. Not everything comes as easilyto me as it seems.
ELLIE: She crumples the paper into a ball andthrows it him. He catches it.
TUCK: What? Don’tscowl at me. It’s true. It actually takes effort to look effortless. It’s a crazy contradiction, I know. And that a huge confession. My heart laid bare.
ELLIE: Last question, Mr. Modesty. What’syour favorite quote?
TUCK: No. You’re mad at me. Hisvoice drops until it’s barely above a whisper. You want to know my deepest secret? Think about everything you learned about melast summer. Do you really want me tosay it here--in public?
ELLIE: No…I suppose I don’t. Shakes her head. Favorite quote, please. Then it’s a wrap. And you totally owe me lunch after this.
TUCK: “Dream as if you'll liveforever. Live as if you'll die today.”
James Dean said that. Have fun today, but also, but make sureyou’re lined up to have fun for the foreseeable future.
ELLIE: I think thatmeans make sure you plan for the future while you have fun today. You know, short and long-term goals.
TUCK: Oh, I’ve got myfuture dreams, Ells. No reason to worryabout me.
ELLIE. Regards him skeptically. Okay, I’ll bite. What future do you dream about, TuckerHalloway?
TUCK: This. Sittinghere arguing with you.
ELLIE: That’sshort-term, not long-term.
TUCK: Maybe it’sboth?
Ellie blushes.
Plus, there’s college next fall, D1 soccer, and maybe travela little next summer with Graham if he can manage to keep himself out oftrouble. He shrugs. Then again, if hecan’t, we’ll just call you.