The Treachery of Beautiful Things by Ruth Frances Long 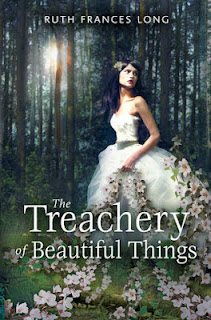 The Treachery of Beautiful Things by Ruth Frances Long
Release Date:  8-16-2012, On Shelves Now
Published by:  Dial Books
Thank you Jen Fisher for letting me borrow it!
The Sisters Say:  A darkly tragic tale of love and betrayal

When I first read the synopsis of this book, I didn’t know if I would enjoy it or not.  I found the idea of getting swallowed by a tree a bit weird.  However, after reading the rest of the blurb, I became intrigued by the idea of a world beyond our own, a world full of beauty and magic but laced with poison.  As the weeks went by, I sort of became obsessed with wanting to read it; so I was super duper excited when Jen Fisher told me she had a copy I could borrow!  YAY!


I’m so glad that I jumped on that opportunity.  The Treachery of Beautiful Things is a bit Labyrinth,  a bit Alice in Wonderland, but wholly and uniquely its own.  I was drawn straight into Ruth’s world, from the moment the trees attacked.  I loved watching this dark fairy tale unfold, full of frighteningly beautiful creatures, as deadly as they are enchanting.  You will never see fairy princesses and knights in shining armor the same again!


While I enjoyed many of the characters in this book, my favorite part was still the world.  Ruth wrote it out perfectly—every frightful and mesmerizing detail.  I felt like I was watching a movie in my head.  I could see the graceful and child-like Folletti flying around with their bow and arrows—their faces twisting with their trickery.  I could see the peaceful river that would seduce you to enter, only to pull you to its depths and claim you as its own.  I could see the watchful eye of the sun slowly sinking from the sky to surrender you to the darkness.  Chilling and addictive, her world is like a drug!


Jenny is the heroine of the story—stuck inside this fantasy world full of temptation and riddles.  She wants nothing more than to find Tom and bring him home—or so she thinks.  But as she pushes through the forest with the aid of Jack and Puck, she starts to discover that Tom is not the only one who needs saving from this world.  There were times I really liked Jenny, but other times that I thought she was childish.  She could stand up and be firm and strong, but then she would give in to a temper tantrum.  I wanted to see more of the adult Jenny—the one driven by desire and passion and a need to do the right thing.  Unfortunately, we tended to see the Jenny that needs protection and sheltering than the girl that won the heart of the forest.


My favorite character (of course) is Jack.  Just like every creature in the Realm, he has both a light and a dark side.  He struggles against his vows to the King and Queen, wanting to help Jenny as much as he can; but he, like all the creatures, must bow to his oaths.  I really enjoyed seeing his struggle between light and dark, good and evil.  You could see the struggle in his face, the hard lines on his forehead, in the way he walked and in the way he talked.  Ruth did a great job of building up his character, making him more than believable.  I wanted to save him—to reach straight into the book and scoop him out.  Of course, I always like the troubled characters—the broken boys that struggle to find the good in a sea of evil.


I really wish we could have seen more of the King and Queen.  They were great characters—full of evil, and I think they could have made the story so much more suspenseful.  However, they weren’t in the book very much until the very end.  I would have loved to see more of them throughout the story.  I kept picturing Oberon like the Goblin King in Labyrinth—one that tricks and deceives using mind control and dreams.  There is even a scene in the book that is reminiscent of the masquerade ball in the movie.  These are the scenes where I would have loved to see more of the treachery that was deeply rooted in these two characters.


While it did have its flaws, I found myself enjoying the storyline and rushing through to see how it ended.  There were times when the story dragged with Jenny’s naïveté and childish demeanor, but not enough of them to really frustrate me.


Overall, this story was darkly entertaining.  Ruth creates a world where beauty is danger, where a kiss can destroy you, and a heart can be your undoing.  Open this book and let the trees swallow you whole—you might just not want to find your way back out.
Posted by Jennifer @ YA Sisterhood at 12:01 AM