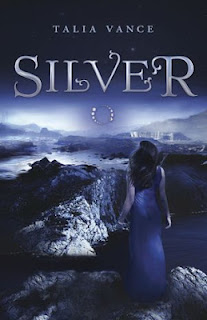 
From the moment I read the blurb of Silver, I had been waiting (impatiently) to read it!  Then Talia told me it was on Netgalley and I have to admit…I did my happy dance—the dance that makes my toddler laugh, that makes my dogs start jumping up and down, and that makes my husband roll his eyes and mumble something about books being more important than oxygen for me.  And in that moment—I might have given up a few breaths to be one of the first to read this book!


The idea of Brianna binding her soul to her mortal enemy just mesmerized me, and I will say that Talia did not let me down!  One of the best things about this book is there isn’t chapter after chapter of set-up that you have to wade through to understand the world.  The action starts in Chapter 1, and I have to say one of the best scenes of the book occurs in this chapter—the scene where Blake discovers who Brianna truly is.  It’s sinister, but in a sexy way, and you can just feel the magic in the way Talia describes the scene.  I felt like time froze and I was swept into their world to watch as both of their destinies crossed.   AND I love the duplicitous dialogue here.  My fave you ask?  Said by Blake: “’Where have you been hiding?’  His smile is lethal.”  Ohhhh…goose bumps!


I always enjoy seeing different mythology in a book, too.  I absolutely love when mythology interwoven into the plot, but usually, all we see is Greek mythology.  Every once in a while you see Norse mythology, but I have never read a YA book that has Celtic mythology in it; and it was intriguing to see something new and different.  You don’t need to know much about the culture either because what you need to know is explained briefly without dragging down the action or dialogue.


One of the great things about this book is it keeps you guessing—which is something I really like.  It may drive some people crazy that they are never able to tell who they can trust, but I think it adds to the suspense.  I will say that I am still a little on edge because I don’t know who to trust!!!  I mean, they’re mortal enemies; so who you can trust and who is good and who is bad is always going to be muddled in the shadows!  I bet Talia is smiling mischievously knowing the torment she is putting us through…shame on you Talia!  Keep it up!


The best character in this book is Jonah—a Son of Killian who has his death grip aiming for Brianna.  He was such a jerk that I wanted to find someone that looks like him and give them a good old-fashioned you’re-an-a** rant.   I have a feelings we’ll be seeing more of his jerkiness in the next book.  Yay!


Brianna is your typical heroine who is struggling with the realization that she is something more than human.  I liked her, although I will admit that I was not blown away by her.  I wanted her to have more of a memorable personality—an aura that would strike you as someone with a great destiny awaiting.  But, really, she just felt like a normal girl—which many people will like because they can relate to her.  I, on the other hand, tend to like my heroines with a little more flare and a little more self-esteem (even if it only comes after gaining their powers).  I’m hoping we will see her character develop into a don’t-mess-with-me-unless-you-want- to-be-called-“Eyepatch”-for-the-rest-of-your-life type of heroine.  But, that’s just me—I tend to like the overbearing, kick your butt gals.


Now for Blake—the eye candy (or is it mind candy since it’s a book?).  He’s the mortal enemy of Brianna, a Son of Killian who has pledged to do away with any daughter of Danu; yet, when their souls are bound together, it awakens something within him that makes him see Brianna as something other than a threat.  I really liked Blake’s passion, but at times it felt unrealistic.  I mean, he’s been trained his entire life to hate anyone like Brianna, yet his feelings for her change so quickly.  I totally believe this is possible, but I wish we would have seen more scenes with him so we could see him struggle with his decision and then eventually fold.  Plus—we would have gotten more scenes with him which I’m sure all the girls would love!  Blake is mysterious and stealthy and protective of Brianna.  He is definitely swoon-worthy.  I’m hoping we will see A LOT more of him in Gold (the sequel)—and hopefully we can see a deeper, more personal side to him.


I enjoyed the romance in the novel, but I wish there was more!  I definitely still wanted to trade places with Brianna at times, but I’d categorize the romance as a spark.  I want to see a full out blaze!  And the scene where their souls are bound—I wanted more!  There was already one mature conversation in the book, so it would have been great for her to keep with the mature theme and given us a few more details!


What a debut for Talia Vance!  Full of mystery and intrigue, betrayal and romance; Silver is a definite Must Read for lovers of paranormal romance!


Content Warning:  I would rate this Mature YA for one scene near the beginning.  I was kind of surprised by this scene because to me, the only reason it was there was to show how much of a jerk Jonah is, but I would have rather seen another way to show that he’s jerk and kept that scene out so more teenagers could read it.


I’ll leave you with one more of my favorite quotes from the book!


“The truth has never seemed clearer to me than it does right now.  We cannot change the past.  We cannot change our future.  The ending was written the moment Blake kissed me on the beach.” ARC, location 2652-2653
**I had the pleasure of beta-reading Gold, the sequel to Silver--and let me tell you, WOW!
Posted by Jennifer @ YA Sisterhood at 12:01 AM