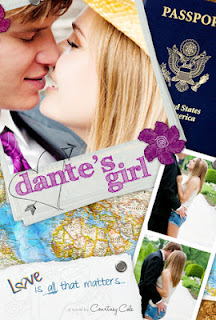 
I have recently been on a contemporary kick, which is strange for me because there was a time I didn’t like contemporaries.  Now?  I can’t get enough of them, so when I saw Dante’s Girl on Netgalley, I jumped at the chance to read and review it.  And what a great choice it was!


This book started out with a bang—quite literally, a plane crash followed by a volcanic eruption.  Talk about putting a damper on travel plans.  But, those disasters spurred the perfect getaway for Reece, who is swept away by the delectable Dante, son of the Prime Minister of the perfect little island off the coast of Greece.  It’s the perfect setting for a whirlwind romance to sweep you off your feet.  I never got bored with this book.  There are so many books today that just go on and on and on with the details, and truthfully, I don’t care about the whether the grass was lime green or green-green.  It’s grass!  But Courtney Cole doesn’t make those mistakes.  Her book is the perfect mix of up time and down time—romance and intrigue, humor and tears.


And what about the characters?


I really liked Reece.  At times she was a bit whiney and got on my nerves, but I liked that she didn’t let things stand in her way.  Once she realized what a baby she was being, she would stand up, brush herself off, and get back to her life.  I also really liked that she was not all, “He loves me, He loves me not,” because, let’s face it, unless you’re Ariel, that game won’t work.  She was down to earth and I enjoyed watching her in this new situation.


And Dante…swoon worthy!  His life is “complicated” which sucks, but still, there is hope for him yet.  He’s caught between what he wants and what his dad wants, and its heartening to see him struggle with his future.  But more importantly, he’s sauve and sophisticated and oh so sexy!  I could just see the corners of his mouth turning up and his eyes twinkling as he looked at Reece.  And I liked that he wasn’t this innocent guy—there was a sexual tension to him that made him even more attractive.


The only part I had a problem with was the “bad guy.”  I felt like his character didn’t have enough dimension to him and he needed to be explored more thoroughly.


Overall, this was a great contemporary romance.  I never found myself rushing through a dull moment, and I was constantly smiling at the relationship dynamics in the book.  The minor characters were fun, too!


Content Warning:  There is a “fade to black” sex scene which is also mentioned later in the book.  There is also teenage alcohol consumption because, well, it’s Europe.
Posted by Jennifer @ YA Sisterhood at 12:01 AM