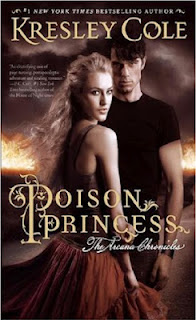 
Trekking across a post-apocalyptic wasteland with a gorgeous Cajun:  Priceless

Words cannot describe the amazing-ness of this book!  It is by far my ABSOLUTE FAVORITE of 2012!  And…I get to meet her at ATBF next week!  *Dances around the room singing You know you make me wanna SHOUT!* Prepare yourself for an insane amount of gushing.


I just loved Kresley Cole’s world—bathed in desire and passion, filled to the brink with unknown forces, and laced with poison and death; Kresley’s post-apocalyptic world won’t just bring you to the edge of a cliff—it will throw you right over, straight into a game of chess.  A game where checkmate means much more than game over.


I have never read anything like Poison Princess.  This book centers around the end of the world, but its not global warming or an alien invasion or the like that caused this catastrophe.  No, it’s much more than that…and it’s happened before!  That’s all I’m going to say about the “apocalypse” because you’ll have to find out for yourself.  But what’s even more unique is that certain characters are the embodiment of tarot cards.  Yes, that’s right—you have Death, the Empress, the Magician, The Fool and so many more!  I just love that she has brought these cards to life—given them a driven purpose—one that will drive them all to complete and utter desolation.


The prose was perfect!  I wouldn’t change a thing.  Kresley was poetic when she needed to be, yet rugged and grotesque when the moment required.  My absolute favorite part of the book was when someone said (I won’t tell you who), “The last two monarch butterflies are thousands of miles apart and flying away from each other.”  ARC pg. 280.  I just love this quote because it shows how delicate our world is—how one decision, which way to fly, which road to take, which boy to kiss—can destroy you, or save you.


Evie, the heroine, is probably my favorite ya heroine!  At first she’s this little rich girl who is slightly curious about the rugged Cajun that just enrolled in her school.  But as the world quickly goes to hell, she builds a rugged shell and becomes the tough, in your face, Empress she is destined to be.  It was so much fun to see her grow into a warrior.  Kresley does such an amazing job using words to mold her into something more than a girl—an Arcana.  Forever changed by loss, immersed in a world full of secrets, and forced to come to grips with her heinous future;  Evie’s journey to truth will sweep you away.


“At that moment, I was dying for the Cajun boy to kiss me…I had to know what the look in his eyes promised.”  ARC, pg. 75


Jackson is so unbelievably rugged.  Translation:  HOT!!!!!  Another translation:  Heart-breaker.  Another translation: Savior?  He shows up just as Evie’s world plummets into an abyss, and he manages to drag her up and out of it.  His raw sexuality just oozes off the page, and there were so many moments when I wanted to snap my fingers and trade places with Evie!  He is charming, not so romantic, but 100% pure bad-boy.  His body language is smoldering with heat, his words are dripping with sex, and his actions are obsessed with protecting Evie.  He’s perfect—in every way!


One of the many “evil” Major Arcana make their appearance in this book, and I’m sure the rest will show up in Book 2.  I loved Death—revenge, hatred, anger, passion, darkness—all rolled into the ultimate killing machine who has only one goal:  KILL THEM ALL.  He will send a shudder down your spine and your heartbeat with quicken whenever this Arcana is near.  And now—Death’s vengeful eye is fixed…on Evie.  And let me tell you, this makes for some amazing scenes and visions!   And his words—laced with threats and hints of what the future holds!  He’s such a great villain, and I love that he’s not the only one!


So….I’ll wrap it up!  This book had the most unique concept I have ever come across in YA.  Every chapter held a new surprise and the ending left me speechless.  But not for long—within a day of reading it, I had loaned it to my neighbor (who LOVED it) and then my mother (who also LOVED it).  The ending is a cliffhanger, but not one that will make you angry or frustrated.  It’s one that will make your pulse quicken with excitement for what’s to come.


This book was perfect!  Perfect I say!