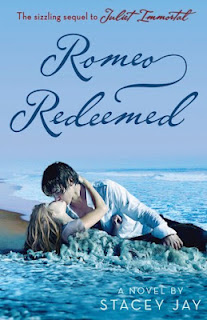 Romeo Redeemed by Stacey Jay
ARC received from Delacorte BFYR via Edelweiss
Release Date:  10-9-2012
Reviewed by:  Middle Sis Jenn
The Sisters Say:  Sinister and Sharp
Romeo Redeemed is the sequel to Juliet Immortal, only this time, the story is told from Romeo’s point of view.  Romeo is tasked with making Ariel fall in love with him.  And what happens if he succeeds?  He gets to be an Ambassador of Light.  While there were definite flaws throughout the book, it truly did live up to its name and redeem Romeo in my eyes.


There were parts of this story that were really interesting, and I enjoyed getting to see inside Romeo’s head.  I found myself feeling sorry for him, even after his centuries of evil-doing.  Now is he a character that I will remember after a year or two?  Probably not.  While it was enjoyable to read about his struggle, I do not see myself thinking back to this book much in the future.


What did I enjoy?


The best thing about Romeo Redeemed is the game of cat and mouse that is played between Romeo and both the Mercenaries and the Ambassadors.  The game is full of suspense, and you will constantly be wondering who are the true bad guys.


Ariel was also intriguing—she’s so full of anger, yet she wants to be good.  However, at times, that anger takes full control of her and she loses herself.  I really feel for her after seeing the way she is treated at school and by her “friends,” and I don’t blame her for not trusting people.   I did find the parts of the book where we see her point of view a bit unreliable, though.  Of course, this could have been a conscious decision by Stacey so that the suspense stayed at a high level.


What are the book’s flaws?


The major flaw I saw was with the short moments where we are transported back in time to see Juliet.  There are only a hand full of times where we see her, and you don’t know what the heck is going on until the book is almost over.  We saw that she ended up happy in Juliet Immortal, but when we first see her in Romeo Redeemed, everything has changed and she is back in the tomb and the Friar won’t let her out.  It took me a while to figure out that the timeline had been messed up by Nurse.  I think Stacey should have done something to make this more clear so that when Juliet pops back into the action, you aren’t left wondering what is happening.


I also felt the ending was rushed—we got to see inside Romeo’s head in a sort of epilogue, but we don’t see anything about Juliet’s future.  I don’t know if a new one is expected (although I don’t know where a next novel would be able to lead), but I felt like Juliet’s part of the story was left unfinished.


Overall, I enjoyed the book enough to finish it, although it did take me a few days.  Most books I am able to finish in a day or two, but I had to space myself out with this mainly to keep from getting too frustrated with the characters and the holes in the story.


Fans of Juliet Immortal should read this just so they can see Romeo’s inner workings—we see why he did the things we did, and we see a side of him that is never shown in Juliet Immortal.
Posted by Jennifer @ YA Sisterhood at 12:01 AM