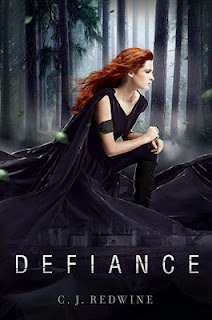 I had been eyeing the cover of Defiance for months, and when I got a chance to read it I might (emphasis on the might) have jumped up and done a happy dance while singing, “I’m so excited and I just can’t hide it!”  Then for a moment I got distracted by Saved By the Bell memories, but soon I was right back to dancing for joy about it!!  It already had so much buzz around it, and I knew it was going to be one of this year’s biggest books.


From Chapter 1, I was completely drawn into C.J.’s world—I mean, it was a world with ancient roots yet filled with powerful technology.  It was like a world out of the 1800s was snatched up, thrown through a wormhole and ended up in an alternate future reality where danger from evil tyrants, wandering highwaymen, and immortal beasts is the norm.  C.J.’s writing is rich with imagery and as you read, you are lifted from your world and thrust into her’s—be careful or you might never want to return!


I loved how dynamic her characters were.  It is very rare that I have an extreme emotional reaction while reading a book.  I run the everyday gamut of emotions—happiness, sadness, jealousy, etc, but it is truly a feat for me to embrace such strong emotions and let them take over just from a book.  But, C.J. did it with the Commander.  His evil is rivaled only by Voldemort or Sebastian in my opinion.  As I witnessed his despotic actions, I could feel my hands closing into fists and I quite literally wished I could jump into the book just to punch him in the face (with brass knuckles).  Every move he makes is methodical and calculated; every word he says is dipped in cruelty; and every feeling he shows is laced with manipulation.


Rachel, her heroine, is feisty and tough.  I will admit, she is a typical bad-a heroine who is forced to grow up too fast.  While she is unique in her own way, she does resemble other many other heroines we see in ya literature.  That didn’t really bother me, though, because while she started out like many other heroines, she ended up in a completely different place.  Many of today’s heroines go through something brutal and then hide away into themselves—Rachel fought back with every fiber of her being, and I enjoyed watching her character struggle and rise against.


I really loved Logan.  He’s strong and convicted, and tries not to let anyone get in his way.  I love the way he stands up to the Commander even when he’s in a losing situation.  It makes him all the more admirable and I found myself rooting for him to just grab the Commander and shove his face into the ground!  He is the perfect mix of anger, love, strength and weakness; and I can’t wait to see what is in store for him in the next books.  Plus, he’s a hottie—which always makes a book better!  I’m slightly jealous of his attraction to Rachel—and I can’t wait for more scenes to make me even more jealous!


The only thing that bugged me about the book was the length of the wilderness scenes.  At times I felt like they just went on too long after we had already got the point that they were alone, scared, and hurt.  While some of those scenes were too long, I wish the ending climax would have been longer.


A Warning about Content:  I would rate this Mature-YA because of the violence in the book.  It is very descriptive with murder and death, and there were times when I was bothered by how grotesqueness of some of the scenes.  Besides the violence, everything else would be fine for any teenager.


With all that said, I really enjoyed reading this book.  C.J. creates a world where violence is the foundation and people cower in fear of a murderous tyrant.  The fear that this world instills is real and palpable, and she really opened her imagination up to me.  She creates a world full of black and white, light and dark, where evil is easily seen, yet fear and tolerance keeps it in power.  I love that her heros are just the opposite, not white or black, but riddled with shades of grey.  I loved C.J.’s world, and I can’t wait to push through the wilderness with her again in the future.