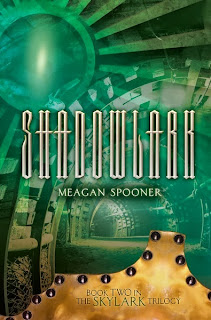 
I really do love this series. Even though I have read so many paranormal dystopian novels, this one feels completely different from anything that I have read before.  There is just something completely magical about it that sucks me straight into the world.


This one starts just a little bit after Skylark leaves off, and Lark is out searching for Basil.  Megan didn’t leave any time to waste, as the action begins straight off for Lark and Tansy.  Even though it’s the creepiest part, I am fascinated by the “shadow people.”  I’m still a bit lost about how the lack of magic turns them into empty cannibals, but it still fascinates me, especially when they seem so normal at times.  Anyone could be a “shadow person,” and that intrigue really drives the tension in the story.


I did have a bit of a hard time remembering everything that happened at the end of the last book, so I do wish that Megan had put in a few more reminders to clear my memory.  I couldn’t remember exactly why Lark left without anyone’s help, and I had somehow forgotten that she wasn’t a renewable.  She’s a drainer, of sort, and the institute is responsible for her ability to drain the magic out of other living beings.  It took me a few chapters in before I realized this again, so I think a few reminders would have helped me get into the book faster.


One of the things I was worried about before starting was whether or not Oren was going to come back.  I figured he would, but I didn’t want to have to wait more than half the book for him to show up like you do in so many other novels.  Megan didn’t disappoint as Oren makes an appearance in the first few chapters!!! YAY!!!!  And he’s just as wild and mysterious as ever—gotta love him for that.  Oren doesn’t speak much, but there is still something about him that just steals my heart.  I think it’s his leap first, look later attitude when it comes to protecting Lark.  That instinct is just so heartwarming for me!


Be ready for some great new discoveries in this book in the city of Lethe.  I was completely drawn in to this underground city, and I was fascinated with the society that had been built.  Sinister and secretive, the city gives more questions than answers.