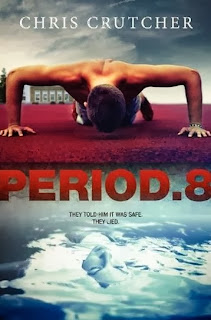 The Sisters Say: A quirky, well drawn high school and characters which left us craving a more fully resolved plot.

Period 8. An hour a day. You can hang out. You can eat your lunch. You can talk. Or listen. Or neither. Or both. Nothing is off-limits. The only rule is that you keep it real; that you tell the truth.

Heller High senior Paul Baum--aka Paulie Bomb--tells the truth. Not the "Wow, that's an ugly sweater" variety of truth, but the other kind. The truth that matters. It might be hard. It often hurts. But Paulie doesn't know how not to tell it. When he tells his girlfriend Hannah the life-altering, messed-up, awful truth, his life falls apart. The truth can get complicated, fast.

But someone in Period 8 is lying. And Paulie, Hannah, and just about everyone else who stops by the safe haven of the P-8 room daily are deceived. And when a classmate goes missing and the mystery of her disappearance seeps beyond P-8 and into every hour of the day, all hell breaks loose.

Author Chris Crutcher began his amazing YA career thirty years ago. In fact, when I read my first John Green novel, I was reminded of Crutcher’s hard hitting individualist characters. My favorite Crutcher novels are Staying Fat for Sarah Byrnes (you have to read it to understand the title) and Deadline. Both are moving books and should not be missed. His other two most frequently mentioned books are Whale Talk and Stotan.

Crutcher often writes about male athletes—solid people with real world problems. His swim teams, his runners and his basketball players frequently use physical exertion to beat the stupid out of themselves after an emotional upset. Even if you’re deeply uninterested in sports (raises hand!) there’s something very appealing about listening to the inner workings of a guy as he plunges himself into 50 degree water for a two hour swim after breaking up with his girlfriend. Or getting sweaty out on the court, looking for the meaning of life while shooting hoops with his best buds. (Yum!)

In Period 8 (Greenwillow 2013) there are plenty of comfortably familiar Crutcheresque touches. Paulie “Bomb” Baum is a long distance swimmer with a big problem. One recent, crazy night, a female classmate, behaving well outside of her usual character, convinced him to cheat on his girlfriend. In the first chapter, Paulie confesses and is promptly dumped. Hard.

Unfortunately, it’s all aired out during Period 8, which is a lunchtime confessional hosted by a favorite teacher, Mr. “Logs” Logsdon. (Warning: everyone in Period 8 has a nickname. Everyone. Even the principal. And there’s a big cast of characters, too.) To paraphrase Fight Club, the first rule of Period 8 is that you never talk about Period 8 outside its walls.

Logs is another Crutcheresque device—each of his books features a brave teacher (or coach) who is both unusual in his or her approach, and unusually close to the students. The teachers in Crutcher’s books are powerful, human voices—you won’t find any of the “mwa mwa, mwa mwap” teacher voices of the Peanuts cartoons here. They’re willing to wade into the thorniest ethical questions even after 3pm has come and gone, with messy and varying results.

In fact, Crutcher is at his best breaking down the myth that high school factions are inviolable. Even outside of the unique bubble of Period 8, our man Paulie has cordial relations with everyone from the nerds to the “thumpers,” aka the Christian youth organization. Crutcher's cliques never feel cliched, even as Paulie gives the “thumpers” the gentle brush off: “As much time as I spend trying to haul myself through the water, I’m suspicious of guys who walk on it.” Their reply? “See you in school, man.”

It’s a quirky, unique high school environment. There’s not a cardboard cutout of a cheerleader or a stoner in sight.

Unfortunately, the plot and premise of Period 8 are nowhere near as taut as Crutcher’s earlier works. Instead of the tight psychological dramas he usually delivers, this one devolves into a sort of thriller. But the bad guys (and there are many) have motivations which feel underexplained at best, and murkily realized at the worst.

Worse, the most vulnerable characters aren't given due resolution. Poor Star, and poor Kylie. After the dramatic climax, the reader is left to wonder about their outcomes. By the end of the book, when the main characters sum up with: “you gotta hate yourself for not getting to know them better,” it feels like a bit of a cop out. As a reader, I would have loved to know them better.
Posted by Sarah P at 7:37 AM