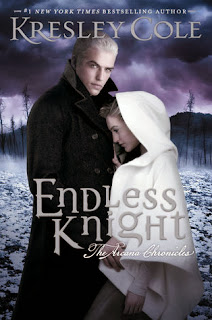 
The Sisters Say:  Enthralling, Seductive and Heart-wrenching, A series that I wish coud be “Endless"


There are so many words that I could use to describe the magnitude of Kresley Cole’s new series.  I could go one and on with the, as Evie says, “SAT words.”  But instead, let me put it simply.  This is a beautiful story of how love and hate collide, how truth and deception walk hand in hand, and how the past always comes around again.


When I first read Poison Princess last year, I just knew that this was going to be an amazing series; and I am so glad that KC’s second book didn’t fall into the sequel slump.  Trust me on this one, this installment is even more amazing than the first.  There is action in every chapter, betrayal around every turn, and romance that will squeeze your heart and warm your extremities!


Endless Knight starts right where Poison Princess lets off, and right away we see how Jackson reacts to Evie becoming the Empress.  I just love how KC is able to capture the emotion in this scene.


Jackson stumbled back from me, making the sign of the cross.  Just as I once predicted.


With that one gesture, he has broken my heart utterly.”  PG 1


I can just feel the pain as the boy she loves stumbles back in fear.  This was such a perfect beginning to the book.  The rain is pelting down, and we know that with the rain comes the darkness, just as Matthew predicted.  And be ready, because with the darkness comes anger, fear, betrayal, and blood.


I just love KC’s characters.  So many books have minor characters that are completely flat, but KC manages to breathe life into each of them.  Good or evil, I feel like I know them; and that just shows you how amazing of a writer she is.  While I really do like many of her characters, one of my favorites remains Matthew, the Fool.  I love how his jibber-jabber is both nonsensical and cathartic at once.  He says so many things that are poetic and disturbing, and if you are like me, you spend much of the book trying to decode each of his messages.  Then when it comes clear, Wham!  It’s like you finally found the missing puzzle piece that has been troubling you.  But then, you discover that another one has gone missing.  I want to go back and re-read this just to hear Matthew’s not so random advice.


There is so much action in this book that you will NEVER get bored.  Page after page is filled with either blood and terror, love and romance, or mystery and deceit.  I was so wrapped up in the book that when it ended, I wanted to tear my heart out because I needed more!  I am dying knowing that I have to wait another year for the next installment.


One of the best parts of this book is the increase in the amount of romance.  I am a romance buff, so when all the kissing started, you can bet I was fully focused!!!!  Minor Spoiler (though not really because the blurb talks of Death’s seduction):  There is a sort of love triangle in this book, but I really loved how it was done.  We see Jack and Evie’s relationship grow, and there are points where you really can see how much Jack cares for her.  But Jack isn’t the sole focus in this book, now we have Death.


Death and Evie share a past (again, not a spoiler as its in the blurb), and let me just tell you—I love the bad guys.   I love the passion that drives them, whether it be from lust, anger, hatred, or whatever.  It’s always so potent, and that just makes their relationships all the more volatile.  This is extremely true when it comes to Death and Evie, and I really loved getting to see glimpses into their past.  Furthermore, you really get to see Death’s true self, and I have to admit, I’m kind of glad I liked him (even with the death threats and what not).


Kresley Cole has a forever fan in me.  This book is nothing short of amazing, and I highly recommend it to EVERYONE!!!  Seriously, go buy this series now because it is a must read.  KC has created the most unique post-apocalyptic world I have ever seen or read about, and I love the idea of people being Tarot Cards.  It’s so utterly distinctive, and there is just so much symbolism and mystery surrounding each of the Arcana.  Her world is bloody and beautiful, and if I were to be plunged head first into an apocalyptic fight to the death, I would certainly want a few of her characters by my side.

And Finally…a few theories I would love to discuss!!!  Let me know if you agree/disagree or if you have your own theories you want to share!!  (There are SPOILERS contained in these theories, so do not read further if you have not read EK!)


It is mentioned that there are 2 Arcana immune to Evie’s poison.  We find out one is the Ogre, but what if the other one is Death??  They both have water on their cards, and Evie is immune to Death’s touch—it only makes sense, he would be immune to hers.


It is also mentioned that there is an Arcana that will not be activated until he/she kills another Arcana.  What if that’s Jack, and that is why he is drawn to them and Evie?
Posted by Jennifer @ YA Sisterhood at 12:01 AM