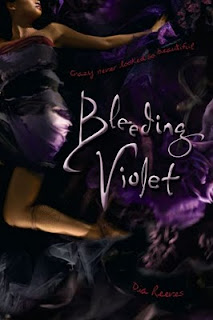 Summary from Goodreads.com: Love can be a dangerous thing... Hanna simply wants to be loved. With a head plagued by hallucinations, a medicine cabinet full of pills, and a closet stuffed with frilly, violet dresses, Hanna's tired of being the outcast, the weird girl, the freak. So she runs away to Portero, Texas in search of a new home. But Portero is a stranger town than Hanna expects. As she tries to make a place for herself, she discovers dark secrets that would terrify any normal soul. Good thing for Hanna, she's far from normal. As this crazy girl meets an even crazier town, only two things are certain: Anything can happen and no one is safe.


Y’all. I can’t even. This book. I just. Wow. It’s been a couple of weeks since I’ve read it and I am still not over my book high. If you can’t handle (or don’t want your teens reading books with) cursing, sex, and extreme violence, look elsewhere immediately. Seriously, I love this book, like LOVE it, but I’m a little twisted and I completely understand those who do not want to read stories that have the aforementioned content. And I’m gonna need to emphasize the Adult in Young Adult here, because I don’t think this book is for anyone under the age of 16. It has extremely dark and disturbing thematic elements and the protagonist is a manic-depressive who you see thinking and going through very intense, violent, and self-destructive behavior. It takes a certain maturity to know if you can handle these things without being negatively influenced by them and if you think there’s even the slightest chance that you could be, don’t read it.

Ok, you’ve been warned, so now on to what exactly I loved about this book… oh wait that’s EVERYTHING. I could gush about it for forever and a day, but to stop myself from doing that I’m breaking it into a top 5 format.

1. HANNA- Y’all. This girl. She be crazy. She’s foul-mouthed, violent, self-destructive, and overtly sexual. She’s a manic-depressive who’s been through her father’s death (she still has conversations with him though), several rounds of psychiatric “treatments” since being sent to live with her Aunt who never wanted her, and she has never known her mother. Suffice it to say Hanna has issues. However, through everything we see her do and hear that she’s done, even when I hated her I loved her, because deep down Hanna and I share the same core desire; all she wants is to be loved. That’s something we all want isn’t it? Just to be loved unconditionally for exactly who we are? She wants this love from her mother, and when it isn’t easily obtained Hanna puts herself through the ringer to get it. Her strength, determination, and sense of self (along with a hilarious, if biting, sense of humor) made me fall in love with her as a character despite the numerous faults that she has.
2. PORTERO- I don’t care how dangerous or crazy this town is, (and believe me it is off-the-charts cray cray) I want to live here. Lures, suicide-doors, portals, possessive spirits and many other paranormally awesome-but-scary things abide here. It is the only place that out-crazies Hanna, and since we see the town through her eyes I fell for it the same way she did. The Mortmaine are there to protect the town from the especially dangerous parts of the paranormal so it isn’t a town of lawlessness or complete chaos, but one that functions normally without letting little things like soul-sucking monsters or serial killers get in the way. For me, it’s forget Disney-World, I wanna go to Portero.
3. THE RELATIONSHIPS- Mother-daughter. Father-daughter. Girl-boy. Boy-ex-girlfriend. Girl-Boy’s Mother. So many relationships, so little time. Every relationship that I just mentioned from this story gave me chills at one point or another. There was so much character interaction and development that I don’t even know where to begin to start describing the depth and poignancy of them. My favorite was between Hanna and her Mother, Rosalee. Rosalee is not your typical mother type. She doesn’t and never has wanted Hanna and when Hanna shows up on her doorstep (literally) Rosalee is none to pleased. The way mother/daughter struggle and grow together is really interesting, infuriating, disturbing, yet also sweet. Reeves is really adept at fleshing out her characters by exploring all of their complexities, and it makes for very compelling reading that I just couldn’t put down.
4. TWISTEDNESS- If this story is anything, it is twisted, but with a manic-depressive as the main character that should be expected. I, for one, loved that Hanna is so different from other female protagonists in that she isn’t a sweet, kind-hearted person. This causes the direction and progression of the story to go quite differently than most YA which I found refreshing. I can’t go over any of the particular twisty-ness in detail as that would be spoilery, but just know that the weirdness and twists and turns in this story were some of my favorites from any books I’ve read recently.
5. THE WRITING- Dia Reeves is my newest author crush. She developed these characters that I fell head-over-heels for, this town that I want to live in, these relationships that make me oooh and aww, yell at, cry over and cheer for all while handling the very dark subject matter that accompanies having a manic-depressive as the protagonist skillfully, with wit, humor, and intelligent writing. I can’t wait to read her new book Slice of Cherry, which is also set in the town of Portero. By browsing her website you can tell that she is as snarky as her protagonist and I know that I will read every single book that she ever publishes because her writing speaks to me. Discovering that there will not be a sequel to Bleeding Violet is the closest I’ve ever come to seriously considering going all Misery on a writer.

Just writing this review makes me want to re-read it already despite my already huge TBR list, and push it like some people push drugs into the hands of my friends. Heed my warnings from above and if you think you can handle it please treat yourself to one of the most deliciously dark, twisted, yet somehow sweet stories in YA today!
Posted by Marylee at 6:00 AM