Power of Six by Pittacus Lore 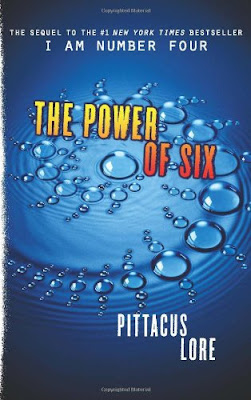 Power of Six by Pittacus Lore
Published by: HarperCollins
Publish date: August 23rd, 2011
Reviewed by: Honarary Sis Beth
Sister says: Powerful, Plot-thickening, and (somewhat) Predictable
summary by goodreads.com
I've seen him on the news. Followed the stories about what happened in Ohio. John Smith, out there, on the run. To the world, he's a mystery. But to me...he's one of us.
Nine of us came here, but sometimes I wonder if time has changed us-if we all still believe in our mission. How can I know? There are six of us left. We're hiding, blending in, avoiding contact with on another...but our Legacies are developing, and soon we'll be equipped to fight. Is John Number Four, and is his appearance the sign I've been waiting for? And what about Number Five and Six? Could one of them be the raven-haired girl with the stormy eyes from my dreams? The girl with powers that are beyond anything I could ever imagine? The girl who may be strong enough to bring the six of us together?
They caught Number One in Malaysia.
Number Two in England.
And Number Three in Kenya.
They tried to catch Number Four in Ohio-and failed.
I am Number Seven. One of six still alive.
And I'm ready to fight.
What a sequel! I really enjoyed I am Number Four so I had high hopes for the sequel and let me say, they were met. At first, I was a bit leary of the introduction of the storyline of Number Seven and even had a bit of a hard time adjusting, but within a few chapters, I was hooked. So much so that when the narrative came back to John, Six, and Sam, I was anxious to get back to Seven and get more of her story.
Speaking of the narrative, this book is written in split narrative between John and Seven. I have mixed feelings in general about split narratives, but, in this book, it works. In fact, it allows you to get a different perspective on what is going on and learn how they are all inter-connected.
Seven is a great character; I love her sassiness, spunky, and no-holds barred attitude toward those around her. Seven is the character that the series had been missing. Not only does she add much information about Lorien and legacies, but she also has an interesting backstory and life on earth.
My favorite character in the book is Sam. What a great guy! He is so dorky and geeky that he is just endearing. Many questions about him and his history get answered and my respect and love for Sam just grows and grows. If you didn't just absolutely love him in the first book, you definitely will in the second! He is proof that NERDS RULE!!!!! Love you, Sam!
Of course, more develops with John. He is still hot and sexy, but, I have to admit, a bit whiny and flakey. Without being too spoilery......but warning *******possible spoiler ahead******* the best part of John's arc is the love triangle that develops. But, I am a sucker for love triangles! :-) His role in the book does help a lot when I am picturing Alex Pettyfer.....HELLO HOTNESS!
All in all, I would have to say, Power of Six is a book that is worth reading. Although, some of the storyline is somewhat expected, it is a powerful sequel that perfectly sets up for book number three. Power of Six.......definitely a success!
Posted by Beth at 3:00 AM