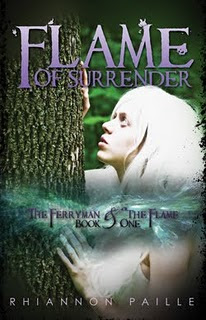 Flame of Surrender (The Ferryman and the Flame Book One)
By: Rhiannon Paille
Expected Publication: November 1, 2011
Reviewed by: Marylee
This sister says: Interesting, Original, Great Potential

Summary from Goodreads.com: The boy who follows death meets the girl who could cause the apocalypse.

Krishani thinks he’s doomed until he meets Kaliel, the one girl on the island of Avristar who isn’t afraid of him. She’s unlike the other girls, she swims with merfolk, talks to trees and blooms flowers with her touch. What he doesn’t know is that she’s a flame, one of nine individually hand crafted weapons, hidden in the body of a seemingly harmless girl.

Nobody has fallen in love with a flame until now. She becomes Krishani’s refuge from the dreams of death and the weather abilities he can’t control. Striking down thousand year old trees with lightning isn’t something he tries to do, it just happens. When the Ferryman dies, Krishani knows that he’s the next and that a lifetime of following death is his destiny.

And Kaliel can’t come with him. The Valtanyana are hunting the flames, the safest place for her is Avristar. Krishani can’t bear to leave her, and one innocent mistake grants the Valtanyana access to their mystical island. They’re coming for Kaliel, and they won’t stop until every last living creature on Avristar is dead. She has to choose, hide, face them, or awaken the flame and potentially destroy herself.

This book is brimming with potential. I don’t know if I’ve ever read something so original (although to be fair I don’t read a lot of high fantasy, which this most definitely is) and I love the idea of this book so much! A beautiful and very well-developed world, powers you don’t read about in other books, a trio of “witches” that remind me of the Weird Sisters from Macbeth, a love story, and an ending that will blow you away are all here. However, this book has me in a bind, because although there is so much to like about this book, there are also several things that kept me from loving it.

I did receive an ARC, so the typos I found that greatly distracted me (I’m a huge spelling/grammar Nazi) and the several editing issues that I had with the book, such as the lack of clarity when changing character POV’s, the “dragging” feeling through some of the non-integral parts of the book and a rushed or glossed-over feeling during what should be huge moments/revelations in the story may be addressed before the book is officially released. But I also had problems connecting to the characters, I felt that the villain(s) weren’t explained thoroughly enough for me to be frightened, and I also think that the description of the book gives away too much of the story. Sometimes it’s good to know something integral about a character that he/she doesn’t and watch them figure it out for themselves, but that did not work for me with this story. I found it tedious to go along with and then I couldn’t believe how quickly she “got it” and accepted it with such ease. Her grappling with the discovery should’ve been the reward for waiting on her to figure it out, but instead we missed that struggle completely which caused me to feel less connected to Kaliel than I already was.

But with all the things that kept me from falling in love with this novel, I still plan to and am excited about reading the next book in this series. Like I stated earlier, this series is choc-full of potential. I believe the author is only going to get better and that Kaliel and Krishani’s journey is going to get more interesting and awe-inspiring as it continues. I have read several very positive reviews of this book, so it’s quite possible that I’m in the minority of people who weren’t particularly thrilled by it. Despite all of its flaws, I would still recommend this book to anyone who is in the mood for something completely original and I will leave you with two of my favorite quotes from the book (besides the one from the top) as my personal reasons why.

“I would do anything to know you were safe and happy. Even if I wasn’t sure it would help, I would still do it. Is that what love is?” ~ *Heart breaks*
Posted by Marylee at 3:00 AM

Email ThisBlogThis!Share to TwitterShare to FacebookShare to Pinterest
Labels: Flame of Surrender, Rhiannon Paille, The Ferryman and the Flame
Newer Post Older Post Home
Three sisters (and some honorary ones) share a love of YA literature, review new books, and talk old favorites.