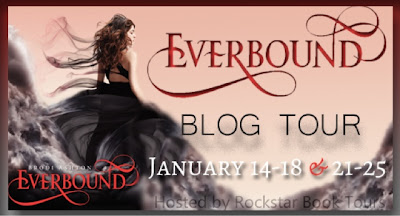 Hey everyone!  The YA Sisterhood is crazy excited to host the EVERBOUND Blog Tour and Giveaway today!  A Big Thank You to Rockstar Book Tours for hosting this tour!  We are huge fans of the Everneath series (even though we all are on different teams), and we can't wait to see what's next!
Be sure to enter to win a signed copy of EVERBOUND after my review!
**************************************

Everbound by Brodi Ashton
ARC received from HarperTeen
Release Date:  1-22-2013
Reviewed by:  Middle Sis Jenn
The Sisters Say:  Ever-lustful, Ever-heart-breaking, Ever-entertaining
Nikki Beckett could only watch as her boyfriend, Jack, sacrificed himself to save her, taking her place in the Tunnels of the Everneath for eternity — a debt that should’ve been hers. She’s living a borrowed life, and she doesn’t know what to do with the guilt. And every night Jack appears in her dreams, lost and confused and wasting away.

Desperate for answers, Nikki turns to Cole, the immortal bad boy who wants to make her his queen — and the one person least likely to help. But his heart has been touched by everything about Nikki, and he agrees to assist her in the only way he can: by taking her to the Everneath himself.

Nikki and Cole descend into the Everneath, only to discover that their journey will be more difficult than they’d anticipated — and more deadly. But Nikki vows to stop at nothing to save Jack — even if it means making an incredible sacrifice of her own.

In this enthralling sequel to Everneath, Brodi Ashton tests the bonds of destiny and explores the lengths we’ll go to for the ones we love.
I was scared to start this one because I am firmly in the Team Cole category (go ahead, judge me, I don’t care!), and I know that it can’t work out because he is, what I consider, the dark hero who will be responsible for Nikki’s freedom and her downfall.  Jack is her man, her white knight, and it will always be him she loves---blah!  So, there is where my hesitation came from, BUT I am so glad I read this one.  It was fantastic!  Brodi brought the Everneath to life (even though it is, technically, death), and I was drawn straight into this blood-thirsty, powerful, and upside-down world.
Besides Cole, the world that Brodi created was my favorite part of the book.  In order to find Jack, Nikki must trek through the rings of the Everneath—all the while, facing darkness and dangers that are unthinkable and terrible.  Brodi borrowed slightly from Dante’s description of the Underworld, but she gave it her own spin.  The imagery was full and dimensional, and I really felt like I was watching it on the big screen as I was reading it.  The rings were somewhat non-threatening at times, but you just knew it was an illusion and that around the next corner lurked something completely and irrevocably evil.  The Everneath is full of amazing terror…I have no idea why Nikki wouldn’t want to rule it!  But that’s my maniacal lust for power that apparently Nikki doesn’t share J  Cole, sweetie, I will rule with you any day!
Nikki was the same Nikki as the one we saw in Everneath.  She is both strong and weak, depending on the situation, but it is her love for Jack that keeps her going.  I truthfully am not a huge fan of her because I think she is too rash.  She leaps head first without thinking about the consequences or even to see how far the fall might be.  She leaves behind her family and friends, with no explanations, and that kind of bugs me about her.  I admire her for risking her life for the person she loves, but I think there had to be a better way for her to handle everyone else.  So…that’s my beef with her, but it might just be me judging her because I think she’s choosing the wrong guy.
And my favorite:  Cole!!!!  Even for those of you who are firmly in the “Kick Cole’s Butt” Category,  I think you will like seeing a bit more from his background.  I loved seeing things from his perspective, and I think you can really see that Nikki is everything to him.  Now whether his intentions are pure are not—that’s yours to judge.  I think he is truly in love with her and that will eventually bring out his true heart, but he is so afraid of something that he keeps those true feelings hidden.  You can really see this in this installment because Cole’s friends are all concerned with protecting him from Nikki.  So while he might have ulterior motives (I mean he does want to take over the world), I still think his actions come from the heart—even though he technically doesn’t have one!  J
And
The
Ending!!!
Looking back, I probably should have suspected, but I didn’t!  I didn’t see it coming at all!  And let me tell you, WoW!  What an ending it is!  I can’t believe I have to wait at least another year to find out how everything ends!!!!!
For fans of Everneath, mythology, and paranormal romance, this is a MUST READ!!!
I was sucked in from the very first page!
Betrayal.
Angst.
Heartbreak.
Revelations.
Everbound has it all!!!!!!!!!!!
﻿
a Rafflecopter giveaway
Posted by Jennifer @ YA Sisterhood at 12:01 AM