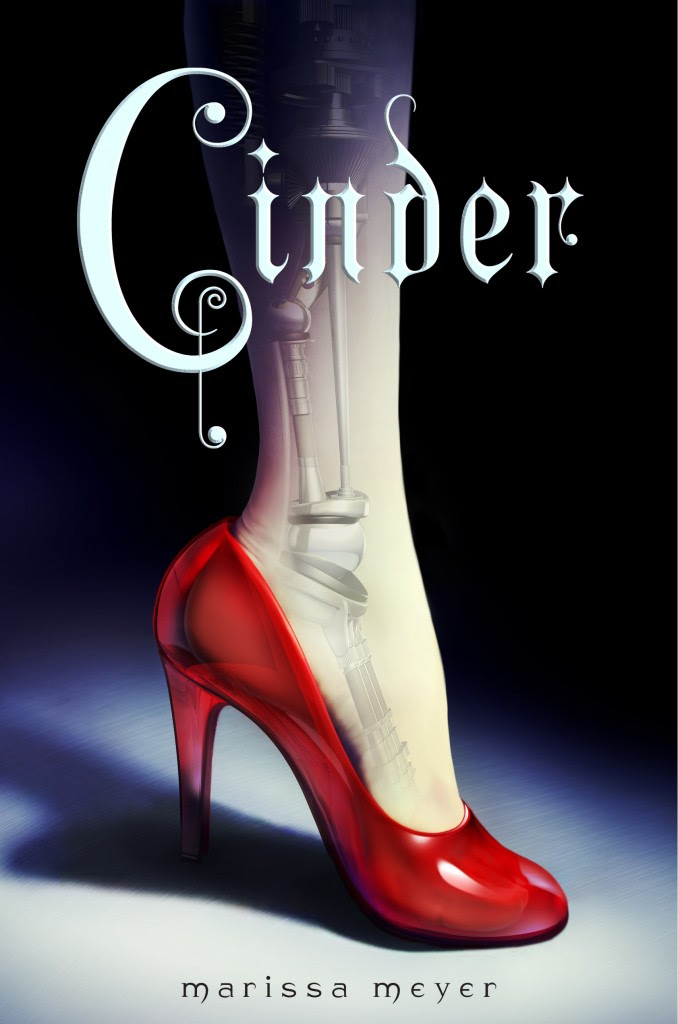 Cinder by Marissa Meyer
Published by Feiwel and Friends
On Shelves Now
Reviewed by:  Middle Sis Jenn
The Sisters Say:  Charming (as in Prince….hehehe), Captivating, and Cool


So, I finally broke down and read Cinder because I have an ARC of Scarlet, and I needed to know what all the hoopla was about.  I really enjoyed it; however, it had been put on such a high pedestal that I don’t think it could have ever lived up to the hype for me.  I was expecting it to just blow me away, and I ended up just getting another good YA book.  (Now, Scarlet, on the other hand, did blow me away!)


I am kind of new to fairy-tale retellings, only having read a few, so I really enjoyed that part of this story.  I loved how Marissa had taken the classic characters and morphed them into something new and different, yet echoing the sentiments of the originals.  I especially loved what she did with Cinder, making her a cyborg in a world where cyborgs are looked upon as little better than scrap metal.  She was a pariah, yet she didn’t let that hold her down.  Cinder knew exactly what she wanted, and even in the face of adversity, loss, and unimaginable revelations, she kept her focus and her strength.  I found myself cheering for Cinder to succeed and win the guy.  Cinder herself was by far the best part of this book—so unique, and I really loved her personality as it shined through the pages.


Now, I’m not sure I understand the fandom behind Kai.  I remember during our Crush Tourney this past summer that so many people loved him, but I just don’t see it.  Yes, he’s this Prince Charming guy, but other than that, there wasn’t anything striking about him.  He just seemed to be this normal guy in a not so normal situation and place in society.  He seemed weak with the Lunars (although most people are I will admit), and I just wanted him to be more…confident and charismatic.  I’m hoping that in the future books he will grow into his position more, and stop worrying about what the world thinks/wants.


I really enjoyed the world that Marissa created—futuristic in some ways, but in other ways, the same as ours.  Earth is being ravished by a deadly plague, and as a result, fear and panic are overwhelming.  I could feel the tension and the uncertainty in Marissa’s words, and her world seemed to come alive around me.  I loved the androids and technology that Marissa described, and I look forward to seeing more of it in the future.


I wish that it would have been a little less predictable.  But maybe Marissa wanted us to be able to predict what was going to happen, I don’t know.  However, I like when I am surprised by the ending or a revelation in the book, and unfortunately, I did not get a surprise in this one.  I saw everything coming, and that was without knowing anything about the book in the first place.  Here’s to hoping that the next books will leave more in the shadows.


Overall, this was a great and fun read.  Is it one that I will rush over to my friends and demand they read at once?  Not normally, but having read Scarlet and knowing what is coming, I just might do it anyway.

Want more Cinder?  It's also available in audiobook format!  Check out a sample here
Posted by Jennifer @ YA Sisterhood at 12:01 AM