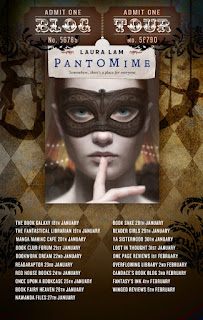 Today we have the pleasure of hosting the Pantomime Blog Tour!!!!  We were lucky enough to get to do a character interview with Micah!  Be sure to check out my review at the bottom of this post.


Hey Micah, Thanks so much for visiting the YA Sisterhood!!!

Thank you for having me, though I don’t quite understand this contraption you call a computer. It must be Vestige.

We’ve got a few questions for you!

1.) What went through your mind with that first jump on the trapeze?

Honestly, not a lot. It was the best plan I could think of at the moment to try and join the circus, and looking back maybe it wasn’t the smartest one. But at least it worked and I didn’t become a pancake of a boy like the ringmaster thought I would.

2.) Besides flying, What’s your favorite part of the circus?

The people. I like the friends I’ve made here, and how no matter how different we all are, we have our own little community. Arik, the other aerialist who is teaching me, has grown to be like an uncle. And then there’s Aenea of course, my partner on the trapeze. Drystan the clown, who used to frighten me but he doesn’t anymore. The “freaks” of Tauro the Bull-Man, Juliet the Leopard Lady, Bethany the bearded woman. Granted, there’s some here I’m not so keen on, but on the whole I think I’m winning them over to my side.

I also like that we’re separate. This is our own haven. Already, I feel removed from the city folk, even though I used to be one of them. We’re out here on the beach, playing a joke on the world.

3.) There is so much magic surround the Alders.  What’s the coolest artifact you’ve ever come across?

‘Coolest?’ As in cold temperature? I’m afraid don’t know what you mean. There was one I saw in the Mechanical Museum of Antiquities that chilled me to the core. The Brass Woman. But I don’t want to say too much about her.

4.) Tell us something about you that we don’t learn in Pantomime.

My first memory is a strange, bright light. Blue and green. I don’t know what it means, but I dream of it sometimes.

5.) Just for fun, we have a few this or that questions for you!  Choose your favorite (or which one you are more prone to) of the pair, and feel free to elaborate!


Fight or Flight? Flight if possible, fight if I have to.


After reading this book, I’m kind of stuck in limbo as to my impression of it.  It was definitely the strangest book I have ever read; I’m just not sure if strange is for me or not.


So, I’ll start with the things I enjoyed.  I loved the world in which Pantomime was set.  It is an old world, full of superstitions and the briefest hint of magic.  At one time, there were beings called Alders who were, essentially, like gods.  They were beautiful and intelligent and strong, and most importantly, they were magical.  However, at some time for some unexplained reason, the gods either left or died out.  But, they left behind remnants and artifacts of their magic.  These were the things that were so interesting in the book.  I wish there would have been more because I just know that these Alders are going to play a role in the future books!


I also enjoyed seeing inside the world of the strange.  The circus was fantastic—macabre yet beautiful.  The inside look into the minds of these people was brilliant, and I found myself pleasantly surprised by how much I felt for them.  I’ve always been a fan of the circus, and Pantomime allowed me to live it.


Now, what bothered me.  First off, I felt there were way too many details.  There were entire pages I skipped and never missed a single important detail.  There was never a time when I had to go back and read what I skipped.  That tells me that the book is too long, and it needed to be edited down.  It was almost 400 pages, and I think it could have easily been in the 300 area.  I might have had an easier time staying focused had it been shorter.


The thing that bothered me the most was that the blurb did not fit the book at all.  I was under the impression that there was some sort of magic or evil that Micah and Gene were going to uncover, but there wasn’t anything like that, at least in this first book.  (I think there might be more magic in the next one).  Instead, it was focusing on Micah and Gene and their struggle to be comfortable in their own skin.  It was more of a coming of age tale in the world of mystery and magic than it was anything else.  The subject matter (which is a huge spoiler and I won’t say anything else) also bugged me.  The sexual components of the story were awkward for me, as well.  I’m not sure I would recommend it to many readers.


After looking at other reviews, many people loved it.  I will admit it was unique and I have not read anything like it, but I’m afraid it ranked too far up on my weird-o-meter for me to truly enjoy it.  With all that being said, I still find myself wanting to know what’s next.  So, who knows, maybe after giving it some space, I will think differently and look forward to the next book.


(Bio under the “about” section)