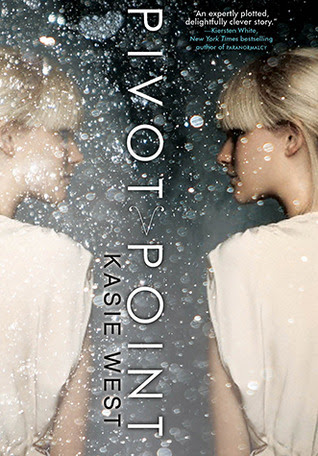 Addison Coleman’s life is one big “What if?” As a Searcher, whenever Addie is faced with a choice, she can look into the future and see both outcomes. It’s the ultimate insurance plan against disaster. Or so she thought. When Addie’s parents ambush her with the news of their divorce, she has to pick who she wants to live with—her father, who is leaving the paranormal compound to live among the “Norms,” or her mother, who is staying in the life Addie has always known. Addie loves her life just as it is, so her answer should be easy. One Search six weeks into the future proves it’s not.

In one potential future, Addie is adjusting to life outside the Compound as the new girl in a Norm high school where she meets Trevor, a cute, sensitive artist who understands her. In the other path, Addie is being pursued by the hottest guy in school—but she never wanted to be a quarterback’s girlfriend. When Addie’s father is asked to consult on a murder in the Compound, she’s unwittingly drawn into a dangerous game that threatens everything she holds dear. With love and loss in both lives, it all comes down to which reality she’s willing to live through . . . and who she can’t live without.


Addison is a Searcher, someone who can see down both roads of her future, no matter the ultimate choice.  When she is forced to choose which parent to live with after a divorce, she searches to see what the future holds.  I really enjoyed how this novel was told—in alternating “realities” as Addie’s search continues.  It was crazy to see how the people in each of her “realities” mold and shape the person that she becomes, in each reality, different strengths and weaknesses present themselves.  I was awed at how seamlessly Kasie was able to weave Addie’s two separate lives, and I couldn’t believe it when I blinked and was almost done with the book!


Pivot Point was a quick and fun read, and I never felt like there was a dull moment.  At times I felt like I was watching a horror movie and I wanted to scream, “Look behind you!” because Addie would discover something that was useless in one reality, but it was something she really needed to know in the other.  So, it wasn’t the action and events themselves that made it feel like I was watching a horror flick, but it was the dramatic irony of me knowing something that Addison didn’t.  I just wanted to swoop in there and tell her everything she needed to know!  This was also what made the book so breath-taking.  I was on the edge of my seat waiting for her to discover the truth.


While Addie wasn’t my favorite heroine, I still admired her confidence and rules.  She didn’t give in to bullying, and her code of morality was inspiring.  My heart went out to her as she suffered heartbreak and loss, and I truly wished that I could give her a great big hug.  I did like her much more in one reality than I did in the other (I won’t say which because of spoilers), and I found myself like this with her best friend, Leila.  It’s just crazy to see how much your environment can shape her attitude and actions.


And the boys….Duke and Trevor.  I was Team Trevor right from the get go.  Though he’s not normally the kind of guy I fall for (he’s too sweet and a comic book geek—but still a tough football guy), I couldn’t help but swoon for him.  Plus, he managed to make me laugh out loud (literally, had to stop and catch my breath) with his description of Charles Dickens as a zombie, so that’s a major plus!  Trevor just seemed truthful and real, and I felt like him and Addie just melded together better than she and Duke.  Although Duke did have his charms.  He’s the quarterback, all charm and smiles; but something about him just nagged at me.  So, I disregarded him and grabbed my “Team Trevor “ sign.


And the ending….I’m not really sure I completely understood what was happening at the end, but I can say that it has left me screaming for the next book!!!!!


This was a fantastic debut by Kasie West, and I look forward to more from her.  Kasie’s world of magic (or mind powers…whatever you want to call it) will suck you straight in.  So, need a new book to read?  Quit standing at the crossroads—instead, join Addie as she spikes Robert Frost’s famous words right back down his throat!  hehe
Posted by Jennifer @ YA Sisterhood at 12:01 AM