Hey guys!!!  I have heard so many great things about the Blood Red Road series by Moira Young, mainly from my little sis, Britt, and my mother.  So, I've decided to pass along my mother's praise for both books!!!! 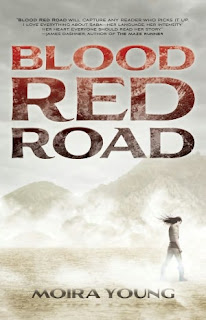 
Rough, Loyal, Admirable, Demanding, and Daring....oh, yeah, I'll left out the most important: stubborn--That's Saba!  And I could have added about 20 more adjectives to describe this unique character, created by Moira Young.  She's like the person we all desire to be--until she crosses the line--then we all just wish we could be her as long as no one knew our true name!  She'll take on anything (hellwurms, the cage, and a barren-cracked world) or anyone (a maniacal King, Tontons, and her heart's desire). When she, with the help of her younger sister, Emmi; her heart's desire, Jack; and the Hawks, an all girls warrior tribe; takes on the world to rescue her twin brother Lugh, you'll grip the book cover much as you would the handlebars of a bike going down a 90 degree slope, only to find that you are on a skateboard instead of a bicycle with nothing to hold! Get ready for a wild ride!

Rebel Heart by Moira Young
"You can't kill all the badness in the world. You cut it down in front of you only to find that it's standing right behind you."
Saba, a fearless eighteen-year-old warrior, trying to save a futuristic world "wrecked" beyond repair, captured our hearts in Blood Red Road--now she wrenches them in Rebel Heart!  Both the reader and Saba long for the return of Jack, her heart's desire, or so says the heart stone.  And finding him takes us on an adventure more nerve racking than a derailed runaway train.  We laugh through our tears, as this proud, stubborn rebel takes on the role of the Pied Piper--drawing others to her while trying to dissuade them from the danger.  In this second book, she and her followers are drawn into the very heart of the Revolution only to find that Jack has joined the Tontons--and her heart and ours might not survive as we hungrily await the third book!